Kareem Abdul-Jabbar’s new film unveils a hidden chapter from hoops history by Patrick Goldstein and James Rainey on Entertainment and Media LA Times It’s hard to imagine any institution that has done more to showcase African American style and culture than basketball, which has spawned generation after generation of infectious icons of cool, from Bill END_OF_DOCUMENT_TOKEN_TO_BE_REPLACED 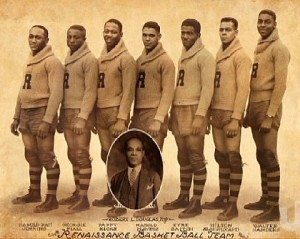 When a documentary makes you interested in a subject you know nothing about, to the point of generating enthusiasm, I’d call that a successful film. Kareem Abdul-Jabbar and Deborah Morales have a lot to be proud of with their maiden effort in the documentary field, On the Shoulders of Giants, which is now available exclusively END_OF_DOCUMENT_TOKEN_TO_BE_REPLACED

By WILLIAM C. RHODEN Published: February 13, 2011 On Thursday in Los Angeles, Kareem Abdul-Jabbar will screen his documentary, “On the Shoulders of Giants: The Story of the Greatest Basketball Team You Never Heard Of,” which tells the story of the legendary Harlem Renaissance Big Five. Among the film’s many outstanding witnesses is Carmelo Anthony, END_OF_DOCUMENT_TOKEN_TO_BE_REPLACED

Click on the image below to view at a larger size.