Dear Scottie, I have nothing but respect for you my friend as an athlete and knowledgeable basketball mind. But you are way off in your assessment of who is the greatest player of all time and the greatest scorer of all time.  Your comments are off because of your limited perspective. You obviously never saw END_OF_DOCUMENT_TOKEN_TO_BE_REPLACED

Steve Greenberg – Sporting News If Kareem Abdul-Jabbar is known for one thing, it’s being perhaps the best center in history. Second, he is known — or not known — as a taciturn icon who never seemed able to express his joy during one of the greatest rides any athlete has ever had. “Twenty-two years END_OF_DOCUMENT_TOKEN_TO_BE_REPLACED 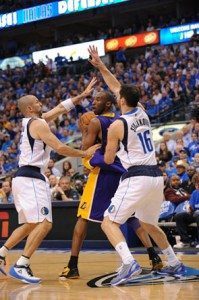 [flv:https://m5iffd.p3cdn1.secureserver.net/flv/bynumejctd.flv 576 324] Game 4 between Dallas vs. Lakers was a demonstration of total domination by Dallas. They completely dominated the Lakers in every category. Dallas got easy baskets in the paint because their guards were able to penetrate the Laker D and they shot the lights out from long range led by Jason Terry END_OF_DOCUMENT_TOKEN_TO_BE_REPLACED

Click on the image below to read the full article and view at a larger size.

President Obama got it right in the way he handled the elimination of Osama Bin Ladin. We have achieved a goal but this conflict won’t necessarily be ending at this point. For the thousands of Americans who lost a loved one on 9-11 there is some sense that justice has been served but as a END_OF_DOCUMENT_TOKEN_TO_BE_REPLACED