What Color Is My World?The Lost History of African-American Inventors 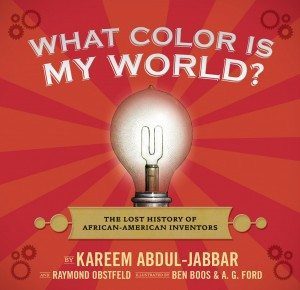 Making use of an unusual format, former NBA star Abdul-Jabbar and his On the Shoulders of Giants coauthor Obstfeld offer an upbeat history lesson set within a fictional narrative framework. Siblings Ella and Herbie, whose story unfolds in typeset chapter booklike pages surrounded by warmly lit paintings of their adventures, are less than enthusiastic about their fixer-upper of a new house. But as eccentric handyman Mr. Mital unveils the house’s potential, he also teaches them about contributions made by African-American inventors (“There’s more to our history than slavery, jazz, sports, and civil rights marches,” he says). Flaps show lifelike portraits of individuals like Dr. Mark Dean, a v-p at IBM; Dr. Charles Drew, who developed the concept of blood banks; and nuclear engineer Lonnie Johnson, inventor of the Super Soaker squirt gun. Ella’s off-the-cuff notes appear inside the flaps, while several spreads provide detailed profiles of other inventors and graphic novel–style passages. The banter between the siblings and, in particular, Ella’s snarky zingers keep things from feeling didactic—it’s an entertaining and often surprising exploration of lesser-known innovators, past and present. Ages 8–12. Agent: Iconomy. (Jan.)