The Guardian: Why suspending the NBA season was a glorious act of patriotism 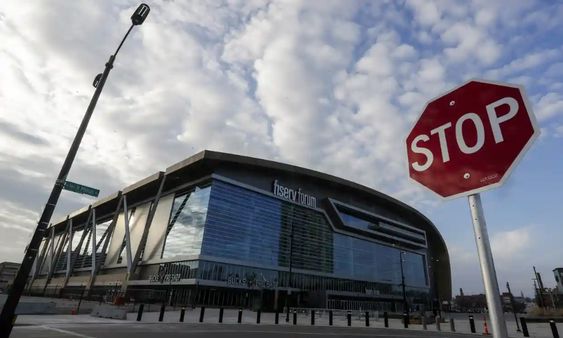 The NBA has led by example and put public health above self-interest, which is more than the Trump administration can say

Those too busy emptying the Costco shelves of hand sanitizer and toilet paper might have missed the news that the National Basketball Association has suspended the season due to the coronavirus pandemic. Other professional and college sports have since also suspended, cancelled or otherwise modified how sports will be played and watched. It truly would be March Madness to do anything else. While some rabid fans and the usual ill-informed science-deniers may complain, most others recognize what a bold and necessary move it was to protect the players, the fans and the country.

Part of the suspension is because Utah Jazz center Rudy Gobert reportedly tested positive for Covid-19, putting other players, coaches, referees and the staff of every team he’s come in contact with at risk. Gobert is the poster boy for those who, like President Trump, have tried to ignore or downplay the virus’s dire impact. In fact, at a press conference a few days before he was diagnosed, Gobert made a point of playfully touching all the microphones to make fun of the public’s concern about the spread of the virus. I’m sure those who used the microphones after him aren’t laughing. Also not laughing is Utah Jazz player Donovan Mitchell who tested positive for Covid-19 the day after Gobert. Many of teams that came in contact with Gobert, Mitchell and the rest of the Jazz have put themselves in self-isolation while awaiting test results.

The other part of the suspension is in keeping with medical professionals urging people to avoid large crowds because that spreads the virus much faster. A single infected person, even if they show no symptoms, sitting in a sports stadium filled with 20,000 fans could infect not only those sitting around them, those they walked in with, those in the food line with them, but also those who come in contact with the virus they leave behind when touching doors, faucets, toilet handles, etc. If they infect just 10 people, and each of those infect 10 others, and so on, soon thousands are infected. The extraordinary measures being taken now from limiting crowd sizes to closing Disneyland and shuttering Broadway is all in an effort to slow the spread while we work on finding a vaccine, expand our abilities to care for the sick, and hope that warm weather will severely curtail the virus (it won’t kill it). As we’ve learned, despite Trump’s assurance on 2 March, that “they’re going to have vaccines, I think, relatively soon. And they’re going to have something that makes you better, and that’s going to actually take place we think even sooner,” a vaccine could take months to years. And even if warm weather slows the virus, it come back even stronger in the fall.

What makes the actions of the NBA and other sports so significant is that they are doing this voluntarily, without coercion from the federal government. They could have dragged their feet – as the federal government did – and wrung every last dollar out of the public before closing their doors. But they put public health above self-interest, which is something the Trump administration can’t say. They are leading by example, which is something Trump himself hasn’t done. Just a couple days ago, while the CDC and every other health advisory group was emphasizing not shaking hands, Trump waded into a group of fans to shake their hands.

Professional sports is one of the businesses forced to take a leadership role because it is so drastically lacking from the federal government. Remember, to save money Trump got rid of President Obama’s Pandemic Response Team, established in 2014 to combat the Ebola outbreak. Trump is also the one who told Americans in a 9 March tweet not to worry because the common influenza killed between 27,000 and 70,000 a year and “Nothing is shut down, life & the economy go on. At this moment there are 546 confirmed cases of CoronaVirus, with 22 deaths. Think about that!”