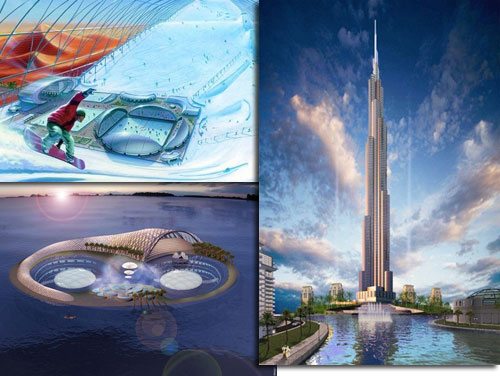 I have recently seen some amazing pictures from Dubai which is an Arab country on the southern shore of the Persian Gulf. I am amazed by the enormous growth that it has experienced in the 15 years since I first visited there.

Dubai has respectable oil industry but that sector of its economy accounts for only 6% of its size. The leaders of Dubai sought to make it a modern commercial hub and not become a place that had only oil to offer. It doesn’t have religious police and women have rights that are actually respected. The growth that I am referring to is truly mind boggling because 15 years ago, the city had at best a few high rise buildings.

Today it looks like a city out of the Stars Wars movies. It is in the process of putting up the “worlds largest structure” and has completed other land development ventures that are truly remarkable including the worlds tallest hotel, the worlds largest waterfront development, and undersea hotel and artificial islands that have been made in the Gulf. Dubai has also hosted major sporting events that have gained the attention of the worlds sporting elite. It has taken a lot of foresight from the Rulers of Dubai to achieve this kind of development in so little time. By diversifying the nature of business in Dubai the nation has assured itself a place in the economy of the 21st Century.