Mycroft and Sherlock: The Empty Birdcage 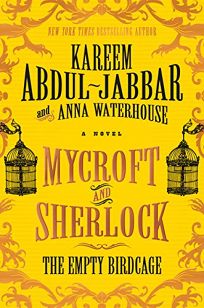 Abdul-Jabbar and Waterhouse’s third pastiche (after 2018’s Mycroft and Sherlock), their best yet, provides intriguing challenges for both Mycroft and Sherlock Holmes while continuing to present plausible backstories for the brothers. In 1873, Mycroft and his longtime friend and partner, Cyrus Douglas, agree to help Chinese businessman Deshi Hai Lin locate Bingwen Shi, the fiancé of Lin’s daughter, Ai, who happens to be an old flame of Mycroft’s. Shi, a land investor, disappeared in London en route to a meeting with a client. Meanwhile, 19-year-old Sherlock, who’s not yet an encyclopedia of knowledge relevant to detecting crime, gets himself tossed out of college so he can tackle a sensational serial murder case. Someone has killed eight people across Great Britain, leaving near each corpse a note bearing the message “The Fire 411!” That the victims appear to have nothing in common adds to the puzzle. The authors do a stellar job of illuminating the siblings’ developing relationship while concocting a clever and twisty plot. Sherlockians will be enthralled. Agent: Deborah Morales, Iconomy. (Sept.)