Why Ninja Warrior is the sport America needs (The Guardian) 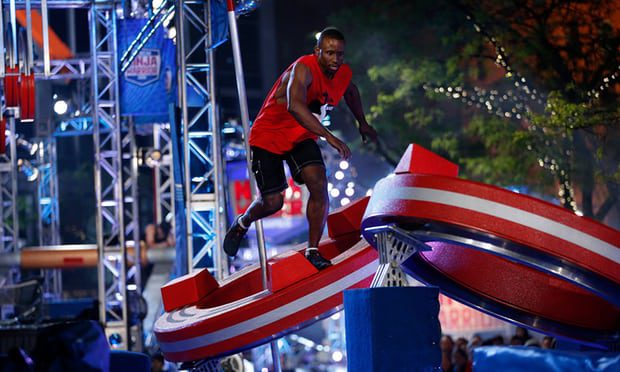 As bantering sports commentators, barstool fans and tall, handsome retired athletes endlessly debate which sport will emerge as the future national pastime, a subversive competitor has been muscling up the pop culture Salmon Ladder. American Ninja Warrior has no realistic hope of surpassing the popularity of baseball, football, basketball, and ice hockey because it can’t be monetized to the extent that they can. And yet ANW, despite being based on a Japanese show Sasuke, may reflect the American spirit of rugged individualism, bootstrap inspiration, and “content of character” equal opportunity more than any other rising sport.

Talk about a level playing field. In what other sport can you watch a doctor compete alongside a stay-at-home mother? A professional rock climber battle it on the same unforgiving course as a weatherman, a teacher, a soldier? A 19-year-old is as welcome as a 70-year-old. A former Olympian or pro-football player has as much chance as an amputee. It is a sport that welcomes the huddled masses and tempest-tossed of all backgrounds, asking only that you leave it all out on the course. No excuses are asked for and, to the credit of each competitor, no excuses are offered. Even when they bounce head-first off a padded obstacle or splat foolishly into the water after a fail, most pop up waving their arms triumphantly. They celebrate the journey as much as the destination.

For those unfamiliar with ANW, the destination is a buzzer that the contestant hits after completing an obstacle course. The tricky part is that there are four separate stages, and each one is increasingly difficult. Completing all four stages with the fastest time wins you $1,000,000. The courses are so grueling that in 10 seasons, only two competitors out of thousands have finished all of them. In Season 7, Geoff Britten became the first to complete Stage 4 – climbing up a 75-foot rope in 30 seconds – with only one second remaining. Unfortunately, in a simultaneously heart-wrenching and heart-rousing moment, Isaac Caldiero also completed the stage but with a faster time, snatching away the million dollars.

ANW has the chummy atmosphere of a small-town barn-raising, with the entire community offering support. There are no angry beer-sotted fans yelling insults or trying to rattle the competitors. Every attempt feels intimate and personal, as if we are all better people just by witnessing their struggle. The thunk we feel in our hearts as someone barely passes an obstacle is an expression, not of fear, but of compassion. The vocal fans embody John Donne’s words that every person “a piece of the continent, a part of the main” because we are all “involved in mankind.” It is a celebration of human hope as palpable as a graduation or wedding.

Watching other sports is undeniably entertaining, but no other sport is as inspiring on an individual level. When we observe skilled athletes do something amazing, it may inspire us to train harder to do what they do. But with ANW, many of the contestants were inspired by the show to overcome some tremendous personal obstacles, from poverty to illness to unhealthy habits. For some it is a chance at redemption, for others a comeback from physical debilitation. Contestants have competed with rheumatoid arthritis, diabetes, and even a recent open-heart surgery. Seeing average Americans who have built their own ANW-style obstacle course in their yards or even inside their homes in order to train, inspires the rest of us to get off the couch and be more active. They make no excuses, so how can we?

This season has featured a run by Ryan Carson, whose right leg had been amputated below the knee. With only three weeks training, Carson managed to complete four obstacles that had defeated many other competitors. He in turn was inspired by Artis Thompson III, an amputee who had competed on several previous seasons.

ANW has been particularly inspiring for women. They must face the same course as the men with no modifications to account for size or strength. Many women have accepted that challenge and through their exceptional performances have become heroes. In 2014, Kacy Catanzaro, at only 5ft and 95lbs, bested men a foot taller and twice her weight to become the first woman to qualify for the finals and, so far, the only woman to complete a City Finals course. She inspired girls to push beyond what they assumed were their physical limitations. Since her initial success, dozens of other women have competed side by side with men.

The popularity of ANW has grown considerably over 10 seasons. In the first season, 1,000 people submitted video-taped auditions; for the 10th season, producers received 50,000 tapes. Gyms specifically designed to train the next generation of contestants have popped up all over America, with young children dancing through Floating Steps and sprinting up the Warped Wall. Though this probably will always be a niche sport, it is the sport that America needs: a pastime that embodies our values of inclusivity, individualism, and hope. It teaches us, to paraphrase Robert Browning, that an athlete’s reach should exceed their grasp.