Time: The Khans Should Be America’s Wake-Up Call 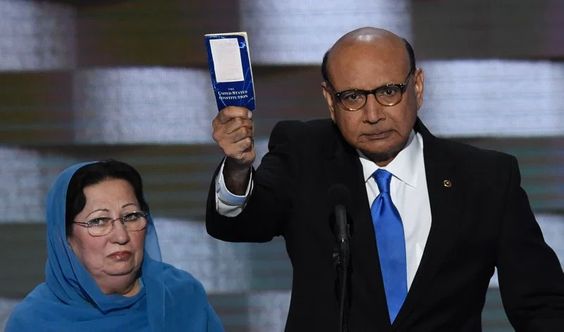 Khizr Khan’s impassioned speech last week at the Democratic National Convention about the heroics of his Muslim-American son didn’t just shame Donald Trump’s crude lack of American values—it reminded us of a quaint concept that we haven’t paid too much attention to lately: sacrifice. Since John F. Kennedy in his 1961 inaugural speech encouraged Americans to “ask not what your country can do for you, ask what you can do for your country,” we haven’t really had much of a national discussion about the role sacrifice plays in maintaining a free society.

Mr. Khan reminded us of that noble ideal when he talked about his son, Army Capt. Humayun S.M. Khan, a Muslim-American who sacrificed his own life in Iraq in 2004 to save other soldiers. Mr. Khan, of Pakistani heritage, had moved to the U.S. in the 1970s for “freedom and opportunity,” the two ideals that  opens in a new windowAmericans feel proudest of providing. Mr. Khan told us that had it been up to Trump, his son never would have been permitted into the country.

“Have you ever been to Arlington cemetery?”  opens in a new windowhe said directly to Trump. “Go look at the graves of brave patriots who died defending the United States of America. You will see all faiths, genders and ethnicities. You have sacrificed nothing and no one.” Mr. Khan’s passion for justice was contagious, but his story of sacrifice was as inspiring as JFK’s call to action. Days after Mr. Khan brandished his pocket edition of the U.S. Constitution, that same edition became the number two bestseller on Amazon ( opens in a new windowbehind the new Harry Potter book), 80,000 copies were downloaded through the American Civil Liberties Union and views of the National Constitution Center’s Interactive opens in a new window Constitution increased by 16 percent. Mr. Khan had made the U.S. Constitution hip again.