The Hollywood Reporter: ‘Marshall’ Director on the Need for Socially Relevant Movies That Aren’t “Preachy” 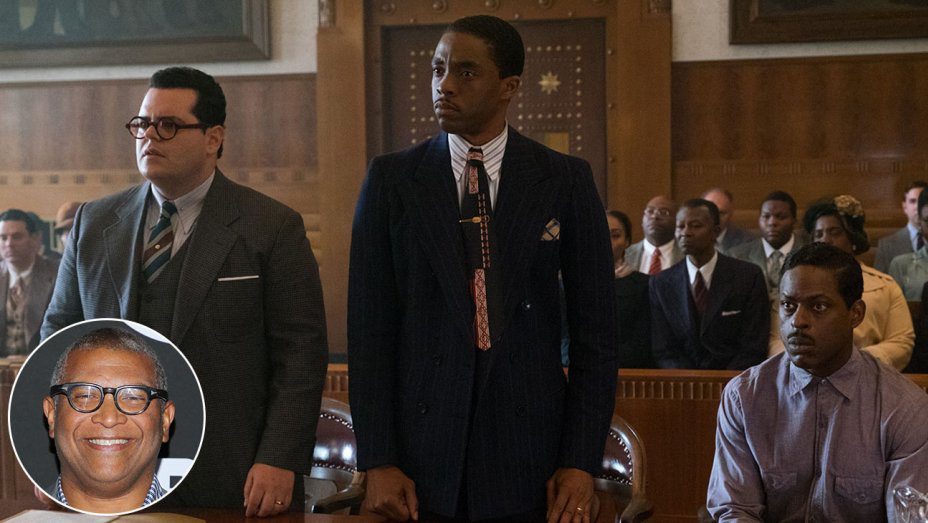 “You grow up on John Wayne and Indiana Jones and you go: ‘Great! I want mine,'” says Reginald Hudlin about why he made a film about the first black Supreme Court justice.

When the courtroom drama is at its best, it is both a suspenseful mystery story and a thoughtful meditation on the hypocrisies and injustices of society. The courtroom is the gladiatorial arena for the ongoing clash between our highest ideals as exemplified by the law and our petty biases as shown by our attempts to circumvent those ideals. However, the goal of these movies isn’t simply to whine about society’s inadequacies, but to use the stiff bristles of intelligent legal debate to scrub off the tarnish of corruption and reveal the shining American values beneath. To Kill a Mockingbird, Twelve Angry Men, A Few Good Men, Inherit the Wind, and A Soldier’s Story did it right. And now Marshall joins those illustrious films by also doing it right — and then some.

Marshall follows a young, brash Thurgood Marshall (Chadwick Boseman) as he defends a black chauffeur (Sterling K. Brown) accused of raping a prominent white woman (Kate Hudson) in 1941 Connecticut. What makes the courtroom dramas like Marshall and those listed above particularly effective is that they are, with the exception of A Few Good Men, set in the monochromatic past. We look back on a time in which people routinely believed that it was OK to act in ways contrary to the U.S. Constitution. At first, we can feel a little smug as we shake our heads at their provincial racism, misogyny or faux patriotism. But as we continue to watch, we begin to understand that the past is a potent mirror to the present and that we have not traveled as far from dark irrationality as we’d hoped. That recognition is meant to shock us woke. Marshall does just that by jump-starting our social conscience while at the same time dazzling us with a riveting story.

When I recently spoke to Marshall director Reginald Hudlin, I told him I was especially impressed with how he managed to balance the legal thriller with social commentary. I asked him whether he did that to make the film more accessible and less preachy. “Yeah, I think genre saves you from self-indulgence,” Hudlin explains. “If you say: ‘Look, even if your mission is to send a message, it better be in an efficient delivery system. And if your vehicle is not at first and last an entertaining film, then the whole thing fails.’”