The Hollywood Reporter: Kareem Abdul-Jabbar on NFL Protests: Athletes and Entertainers “May Be Our Best Hope” 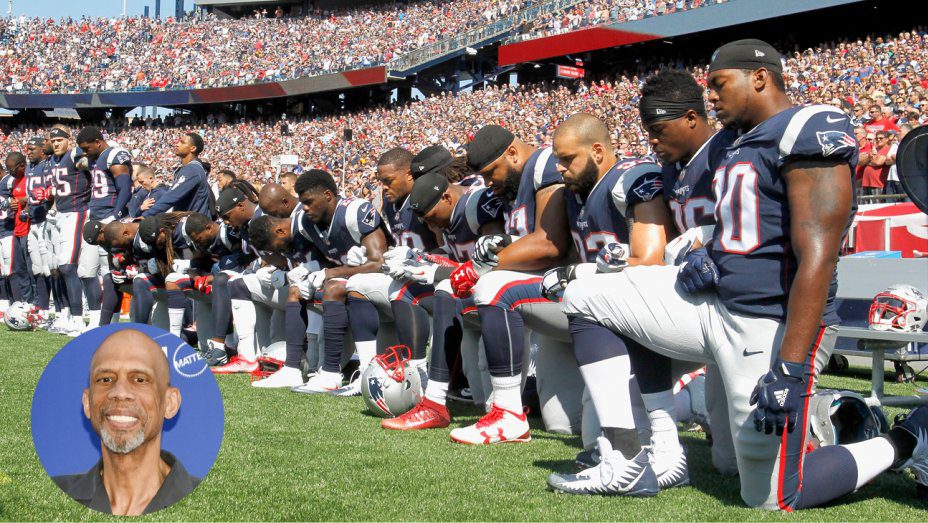 “I have never been prouder to be a part of the athletic community,” writes the NBA great and THR contributor as even Trump supporter Tom Brady resists the president’s attacks on pros who #TakeaKnee.

I have never been prouder to be a part of the athletic community than I was this weekend as players and owners in football, basketball and baseball displayed public unity in their resistance to the racist, anti-veteran and anti-American statements by President Donald Trump. Talk show hosts and other celebrity entertainers from Stevie Wonder to Eddie Vedder to Samuel L. Jackson voiced their heartfelt support. This marks a decided shift in the sports and entertainment industries’ role in political resistance to the Trump administration’s assault on American values and constitutional civil liberties. They have evolved from quiet protest and heckling sarcasm, to respected leaders informing the public about what’s at stake. And in doing so, perhaps change the downward social spiral we are in.

What makes this uprising of moral indignation and political zeal in the entertainment industry (and I include sports as entertainment) so significant is that these people speaking out do so with the full realization that they have something personal to lose. The players risk their entire futures, including jobs as well as endorsement deals. The NFL, MLB and NBA had previously taken a dip in attendance and in TV ratings, so the possibility of alienating potential viewers and park attendees is a bold move. Clearly, they are all motivated by something more important than profits: patriotism. The prospect of having the president dictate team policy while shredding the First Amendment was too much for many.