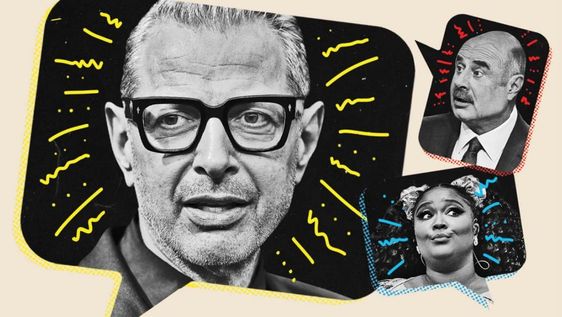 After saying something dangerous or ignorant, public figures tend to double down or give snarky non-apologies. The Hollywood Reporter columnist Kareem Abdul-Jabbar offers them some advice.

One of Jeff Goldblum’s most famous movie lines is from Jurassic Park, when, as Dr. Ian Malcolm, he admonishes: “Your scientists were so preoccupied with whether or not they could, they didn’t stop to think if they should.” The same can be said about stars when publicly offering their opinions to millions of people: They are so focused on the entitlement to speak, they don’t stop to think if they should. Now Goldblum faces media backlash for saying something that some argue is anti-Islam. He’s part of an ongoing media Geiger counter that tests every celebrity utterance to see if it’s radioactive. That’s as it should be, because their words can have a healing or harmful effect. And when it’s harmful, some choose to apologize, some to double down, and some offer a snarky non-apology.

Goldblum appeared on RuPaul’s Drag Race and, while judging a contestant’s stars-and-stripes-themed hijab and caftan, mused, “Is there something in this religion that is anti-homosexuality and anti-woman? Does that complicate the issue? I’m just raising it and thinking out loud and maybe being stupid.” The  opens in a new windowinternet exploded with accusations of malicious Islamophobia. As a Muslim who has faced insults and threats for more than 50 years, and has consistently called out anti-Muslim sentiments in politics and popular culture, I’d have to say this is not such a case. That doesn’t mean it wasn’t dumb. It just wasn’t malicious.

Everything depends on context. In this case, Goldblum wondered aloud — oblivious and ill-informed — about the contrast between the traditional Muslim outfit and the treatment of women and homosexuals on a show that celebrates both. He voiced a common myth about Islam, as well as about Judaism and Christianity: that they are monolithic religions with only a single viewpoint. Orthodox Judaism, Catholicism and evangelical Christianity often espouses what some would consider homophobic and misogynistic teachings. But there are many versions that teach acceptance. That Goldblum didn’t know this is disappointing; that he expressed the movie-villain version of Islam is dangerous because it perpetuates misunderstanding and hatred of Muslims.

Clearly, that was not Goldblum’s intention. Anyone who knows him from his interviews or watches his addictive The World According to Jeff Goldblum on Disney+ knows that part of his appeal is his quirky charm and think-aloud, off-kilter musings. Unfortunately, on RuPaul’s show these musings were not charming. But the backlash and the backlash to the backlash are merely the left and right flagrantly brandishing their street cred.

But there are plenty of examples of stars who have offered some heinous opinions and, when called out, refused to take responsibility or offered an insincere apology, despite the possibility of violence, injury or hate. Many of them take their lead from President Trump, who in recent weeks touted an unproven medicine for COVID-19 that resulted in an Arizona man dying (and causing a shortage of the medicine for lupus patients) and wondered about the potential of disinfectant being ingested or injected (resulting in three men drinking liquid cleaning products to ward off the virus and NYC Poison Control receiving twice the usual amount of calls). When asked whether he takes any responsibility for these men, Trump said, “No, I don’t.” The first step in a sincere apology is to take responsibility for your actions to show you are smart enough to understand the repercussions. Refusing to do so doesn’t make you look strong or right, it makes you look foolish and reckless.