Trump’s opponents have the moral high-ground. Let’s not squander it (The Guardian) 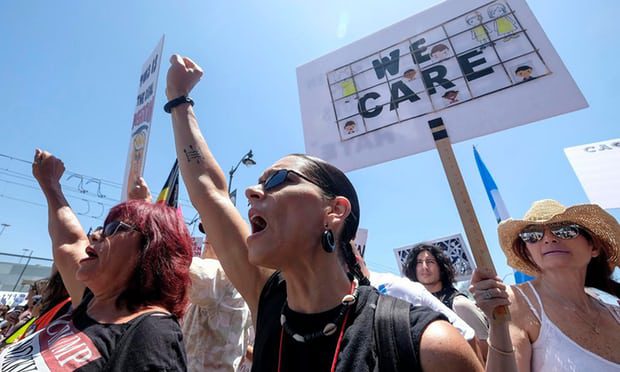 As Americans fear losing hope, some have turned to personal attacks on White House figures. That won’t fix the national crisis

n the 1941 noir potboiler movie I Wake Up Screaming, Betty Grable’s character asks a corrupt cop: “What’s the good of living without hope?” To which he replies, “It can be done.” The movie’s title is how I’ve been feeling lately when I snap awake each morning, grab the newspaper and read what new atrocities Trump has committed against the English language, common decency, and American ideals laid out in the constitution. Acts of corruption, racism, and public lying that have driven other politicians from office in shame are merely the outrage du jour for the Trump administration.

I wake up screaming because I’m afraid Americans are being herded to a place that is not the “shining city on the hill”, but a place without hope – and that we are slowly but inevitably getting used to it, the way a prisoner gets used to a tiny cell.

Many Americans, fearing this erosion of hope, suffer from a national malady of rage, betrayal, and helplessness. In a desperate effort to express their frustration, some people have taken to publicly shaming Trump collaborators and supporters. The Trump attorney Rudy Giuliani was booed at Yankee Stadium, the White House spokeswoman, Sarah Sanders, was asked to leave a restaurant by the owner, the Trump supporter and Florida’s attorney general, Pam Bondi, was confronted by protesters after she left a movie, and the homeland security secretary, Kirstjen Nielsen, was heckled by protesters while she dined at a Mexican restaurant. And while part of me is pleased to see these morally abusive people confronted by their victims, this is not the best way to achieve the goal of national reform and reclaim our hope for America.

This is not a plea for civility. The country’s leadership has proven itself so arrogant and immune from reason, compassion, and democratic principles that we are way past civility and decorum. Asking people to be civil in these circumstances is like calling starving Oliver Twist rude for asking for more food. Frankly, there’s so much at stake, and the administration is so unresponsive, I’m shocked that there aren’t huge protests and boycotts every day across the country.

How bad is it? A recent bipartisan poll commissioned by the George W Bush Institute, the University of Pennsylvania’s Biden Center, and Freedom House found that 80% of Americans are either “very” or “somewhat” concerned about the condition of democracy in the US. Half of Americans fear that we are in “real danger of becoming a nondemocratic, authoritarian country”, with 55% believing our democracy is “weak” and 68% worried it’s “getting weaker”. Michael Abramowitz, the president of Freedom House, observes: “There appears to be a crisis in confidence in the functioning of our democracy, and it is not a party-line issue.” These are real Mission: Impossible/James Bond fate-of-the-world type stakes.

Because so many Americans wake up screaming about the declining state of our country, naturally they want to scream at those responsible. The way you’d scream at a parent you just walked in on cheating on your other parent, realizing that this will result in the destruction of your family. Marvin Gaye’s Inner City Blues captured the spirit of this need to raise our voices when he sang: “Make me wanna holler / The way they do my life.” But our raised voices must do more than release our frustrations – they have to join a growing chorus that effects change.

I’m not against dramatic protests. When Tommie Smith and John Carlos raised their gloved fists in the 1968 Olympics, a lot of people, even some black people, were angry at such an audacious display. But many of us felt a lift in our hearts. Martin Luther King’s Selma march, the 1955 Montgomery bus boycott, the 1968 protests at the Democratic National Convention – these were bold and daring protests by a few against a mighty majority. And they were effective in inspiring discussions that instigated change.