The Guardian: Basketball is my first love, but the athleticism of beach volleyball is amazing 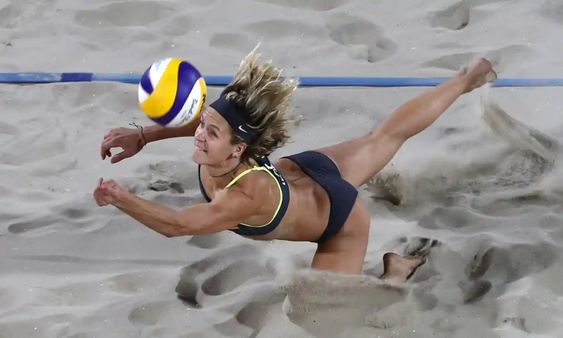 The sport has come a long way since it was an excuse to hang out at the beach with a beer. The skills of its athletes are breathtaking

Not many people know that my friend and mentor Wilt Chamberlain was not just one of the greatest basketball players who ever lived, he was also a world-class volleyball player. Although he didn’t start playing volleyball until he was 33 and still with the Los Angeles Lakers, he sponsored his own team, was a board member of the International Volleyball Association, and was eventually named to the Volleyball Hall of Fame. “For a long time, volleyball became as big a part of my life as basketball once was,” he said. “Being able to hold my own against the best in the world, on the beach or indoors, is something I’m very proud of.” Although he played both indoors and beach volleyball, I think beach suited his personality more.

I was reminded of his intense passion while watching the beach volleyball world championships in Germany this summer. Forty-eight men’s teams and 48 women’s teams competed in one of the most grueling, graceful, explosive, and entertaining sports being played today. Watching the men and women spike, block, and dive around a court that is almost impossible for two people to adequately cover makes one appreciate the elite level of athleticism necessary to be competitive on an international level. After basketball, it may very well may be the second-most exciting international sport.

Originating in Hawaii, beach volleyball has been around since 1895. But that was merely the indoor version of six-person teams transferred to sand. The modern beach volleyball game of two-person teams was invented in 1930 by Paul “Pablo” Johnson on the Santa Monica beach. Bored with waiting for the rest of the players to arrive, he and three others mapped out a smaller court and began playing the first recorded game of two-a-side beach volleyball. It wasn’t until the 1970s and 1980s that beach volleyball became popular as, not just a sport, but a representative of beach culture. Surfing and volleyball became intertwined in the public’s mind and watching either came to represent an endless summer vibe of beach parties that lasted long into the night. If 1960s movies popularized the teen surfing scene as innocent Frankie Avalon and Annette Funicello romping in the sand, the addition of beach volleyball in the 1980s added a bad-boy element, like remaking Beach Blanket Bingo but directed by Martin Scorsese and starring Jack Nicholson and Robert DeNiro.

The professional beach volleyball stars of the 1980s played like pioneers of any sport: passionate and freewheeling, knowing they were defining the sport as it grew. Sometimes making it up as they went along. Sinjin Smith, Karch Kiraly, and Randy Stoklos were big personalities as well as big players. Tim Hovland was known for emotional outbursts, sometimes ripping off his shirt in anger. Kiraly once tore down a net during a match. These hormonal hijinks were good for popularizing the sport, bringing fans out to see a sport where anything could happen. Stoklos and Smith were even featured in the 1988 video game Kings of the Beach.