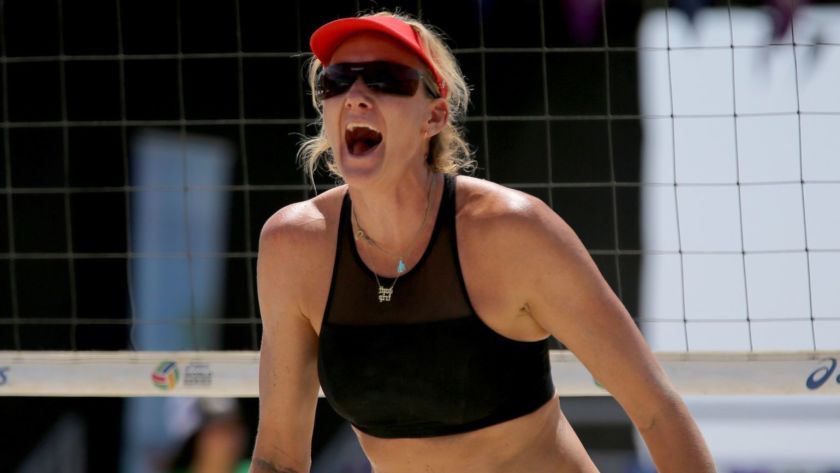 Three-time Olympic gold medalist Kerri Walsh Jennings is an amazing athlete. But her recent Instagram posts about being “brave” for not wearing a mask while shopping were ignorant and dangerous.
(Allen J. Schaben / Los Angeles Times)

After years of being told to “shut up and play,” athletes have finally fought their way out of the locker room and begun publicly voicing their opinions. Some people would prefer we had remained silent sentinels. But that would be like asking clergy who had become aware of sexual abuse to “shut up and pray” rather than speak out.

Athletes have worked hard and sacrificed a lot to be taken seriously as more than stereotypical dumb jocks. Professional sports organizations and owners have threatened athletes with fines and even with the loss of their careers to silence their voices. But this last year saw athletes across a broad spectrum of sports — from basketball’s LeBron James to baseball’s Clayton Kershaw to tennis’ Naomi Osaka — forming a chorus for humanity.

Unfortunately, along with these informed and articulate voices, we’ve also heard some downright silly opinions that threaten to reduce athlete’s voices to the old dumb-jock stereotype — as well as undermine progress toward social equality.

Earlier this month, former NFL player Herschel Walker  opens in a new windowreleased a video declaring his rejection of Black Lives Matter because two of the organizers claimed they were Marxists: “Is this who you are supporting? A trained Marxist tells you they are anti-government, anti-American, anti-Christian, anti-everything.”

Everything about this statement is misleading, illogical, or simply wrong (anti-everything?). Walker shows a clear lack of understanding of what BLM is or who supports it. There are some organizations that use the name Black Lives Matter, but they are only a small part of a larger movement that encompasses many loosely affiliated groups and individuals. Civil rights activist DeRay Mckesson  opens in a new windowdescribes the movement as including “all who publicly declare that black lives matter and devote their time and energy accordingly.” How a Black person like Walker doesn’t know this is astounding and irresponsible.

If he had done any reading on the subject, he’d have learned that  opens in a new windowfour different polls have suggested the BLM protests were the largest movement in America’s history, with anywhere from 15 million to 26 million people participating. These many millions of Americans aren’t espousing “Marxist” ideology, they are protesting anti-American racism.

Walker’s hasty generalization, which uses a tiny sample to reach a conclusion about a far larger group, is the bedrock of most racist claims. The same kind of flawed reasoning has been used to lump protesters, rioters and looters together in a single group because they were in the same location. President Trump has openly admitted to lying to the public about the seriousness of the pandemic, to grabbing women’s crotches, to deliberately walking in on semi-naked teenagers during pageants, and to cheating on his wife. Should we conclude from his behavior that all Republicans are lying sexual predators and adulterers? Of course not, and, like Black Lives Matter supporters, they shouldn’t be lumped together as a single monolith.

And then there’s beach volleyball gold-medal Olympian Kerri Walsh Jennings, one of the most amazing athletes I’ve ever seen. On Sept. 6, Jennings  opens in a new windowposted on Instagram a lengthy justification for going shopping without a mask, which she called “a little exercise in being brave.” Faced with a lot of backlash, Jennings posted more  opens in a new windowrambling mish-mosh about how “we have to stay mindful of the FACT that our freedoms have slowly been taken from us with our consent.”

Though Jennings said she was “advocating critical thinking,” there was none in either of her explanations. Which freedoms are we giving up? The freedom to potentially transmit a deadly disease to other shoppers? Mask refuseniks tend to see themselves as brave freedom-lovers rather than what they really are: the modern-day versions of the doubters who, when it was discovered that microscopic organisms caused deadly diseases, laughed and said, “If you can’t see them, they don’t exist.”

While it’s true that everyone has the freedom to be ignorant, the ignorance of mask resisters threatens the health and lives of others, making them a major public health hazard. Their kind of “bravery” has contributed to 200,000 American deaths.

Novak Djokovic, the world’s No. 1-ranked men’s tennis player, is another athlete who has abused his megaphone. He  opens in a new windoworganized a tennis tournament at the height of the COVID pandemic in June at which players and fans participated without masks or social distancing. He and his wife contracted the virus, as did other participants, yet Djokovic argued that “if I had the chance to do the Adria Tour again, I would.” Fellow tennis star Dominic Thiem, who played in the tournament, defended Djokovic, saying, “He didn’t break any laws.”

Being responsible role models during a worldwide pandemic that has killed nearly a million people isn’t about laws; it’s about concern and respect for the lives of others, especially the others who can’t afford to miss work or don’t have access to good healthcare.

When I think of the personal sacrifices of athletes like Muhammad Ali, Jim Brown, Tommie Smith, John Carlos and Colin Kaepernick, and the harsh price they all paid for using their voices to advocate for a more equitable and safer world for everyone, it’s distressing to see other athletes tarnish that legacy. Yes, they have a right to speak out, but they also have a responsibility to use their voices to improve the world rather than harm it.

Kareem Abdul-Jabbar, a recipient of the Presidential Medal of Freedom and the NBA’s all-time leading scorer, is the author of 16 books, including, most recently, “Mycroft and Sherlock —The Empty Birdcage.”  opens in a new windowKareemAbdulJabbar.com