On the Shoulders of GiantsNow on SHOWTIME 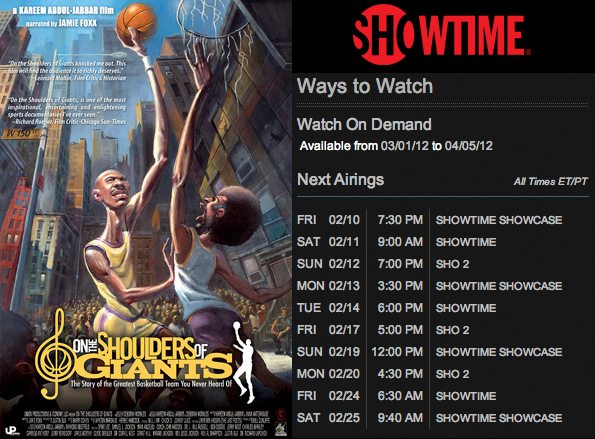 Click on the OSG Poster above for more info

For those of you who have SHOWTIME, the documentary ‘On The Shoulders of Giants’, produced by Lakers legend Kareem Abdul-Jabbar, will be airing on the network’s various channels over the next couple of weeks, beginning tonight. Below is a synopsis of the film. This is one worth watching.

Six-time NBA champion Kareem Abdul-Jabbar presents this documentary that relates the history of “the greatest basketball team you never heard of,” the Harlem Rens. Formed during the Harlem Renaissance that also produced some of America’s greatest jazz musicians, the extraordinary all-black team regularly trounced white teams in the years before Jackie Robinson broke the color barrier in professional sports, going 112-7 in 1932-33, winning the World Basketball Tournament in Chicago in 1939, and inspiring a generation of Harlem-born athletes.