On the Shoulders of Giants Silver Winner33rd Annual Telly Awards

opens IMAGE file June  19, 2012 The Telly Awards has named Iconomy, LLC Media & Entertainment as a Silver Winner in the 33rd Annual Telly Awards for their piece titled On the Shoulders of Giants – The Story of the Greatest Basketball Team You Never Heard Of. With nearly 12,000 entries from all 50 states and numerous countries, this is truly an honor.

On the Shoulders of Giants, executive produced by Kareem Abdul-Jabbar and narrated by Jamie Foxx and Abdul-Jabbar, tells the story of the Harlem Renaissance Big Five, more commonly known as the Harlem Rens. In 1939, the world of professional basketball was segregated. “Colored” teams could compete against white teams but could not vie for championships or belong in the same leagues. Preeminent among those teams was the Harlem Rens, the best of the black teams yearning for a chance at a national championship. The players not only beat tremendous odds, from pervasive racism to the Great Depression, but also became the first world champions of professional basketball.

The Telly Awards was founded in 1979 and is the premier award honoring outstanding local, regional, and cable TV commercials and programs, the finest video and film productions, and online commercials, video and films.  Winners represent the best work of the most respected advertising agencies, production companies, television stations, cable operators, and corporate video departments in the world.

A prestigious judging panel of over 500 accomplished industry professionals, each a past winner of a Silver Telly and a member of The Silver Telly Council, judged the competition, upholding the historical standard of excellence that Telly represents.  The Silver Council evaluated entries to recognize distinction in creative work – entries do not compete against each other – rather entries are judged against a high standard of merit.  Less than 10% of entries are chosen as Winners of the Silver Telly, our highest honor.  Approximately 25% of entries are chosen as Winners of the Bronze Telly. 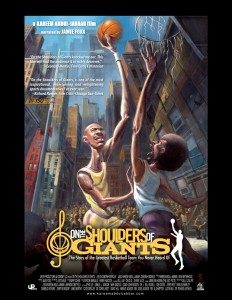 opens IMAGE file “The Telly Awards has a mission to honor the very best in film and video,” said Linda Day, Executive Director of the Telly Awards.  “Iconomy Mutli-Media & Entertainment, LLC accomplishment illustrates their creativity, skill, and dedication to their craft and serves as a testament to great film and video production.”

“The story of the Rens isn’t just a story of an African-American basketball team.” Says the film’s director & producer, Deborah Morales. “Above all, it tells the story of heroes struggling toward athletic and moral victory. I am thrilled to receive the Telly Award as we were able to entertain and educate on a piece of forgotten history based on 40 seconds of footage and a few newspaper articles. Our goal is to develop and build multimedia projects that focus on social injustice and racial intolerance.

To find out more about the Telly Awards visit our website at www.tellyawards.com

About opens in a new windowIconomy Mutli-Media & Entertainment, LLC<br>Founded in 2006 by Deborah Morales, Iconomy ® helps icons and prominent individuals go from succsess to significance by converting their dreams into economic reality by creating brand-unique platforms in film, books, digital domains and educational materials. Iconomy ® is a division of Iconomy, LLC and is actively seeking to acquire additional finished independent features and documentaries about forgotten heroes who have contributed to and impacted American history. If your film is selected, it will be submitted for multiple platform distribution including VOD, instant streaming, pay per view, DVD distribution, and educational learning products under the Kareem Abdul-Jabbar Presents banner. It will also be personally promoted by KAJ. On the Shoulders of Giants is currently available to watch instantly streaming from Netflix, on pay per view via Showtime and available on DVD in Target, Wal-mart, Best Buy, Amazon and iTunes.

opens in a new windowSilver Winner confirmation for Best Graphics

opens in a new windowBronze Winner confirmation for Best Documentary