Nickel: Long after he left, Kareem Abdul-Jabbar is rooting for Bucks – and Milwaukee – once again 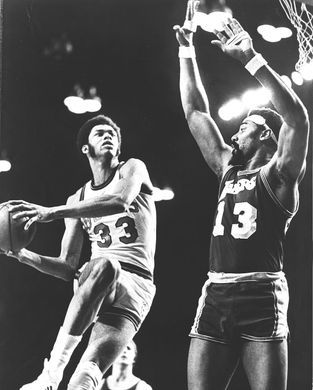 In the early 1970s, Kareem Abdul-Jabbar lived in Juneau Village on the east side and the doorway to his apartment was reconstructed to better accommodate his 7-foot-2 frame.

But he never really did feel at home, not in Milwaukee, and not in the Midwest.

So after six seasons with the Milwaukee Bucks, three NBA most valuable player honors and one championship in 1971, Abdul-Jabbar asked for a trade and landed in Los Angeles, where he went on to a 20-year career with the Lakers that made him a legend.

And the Bucks – division leaders for four straight years with him – were never really quite as dominant again.

Four decades later, Abdul-Jabbar was back in Milwaukee, courtside at Fiserv Forum, cheering on the Bucks in Game 1 of their first-round NBA playoff series against Detroit. So many parallels bring back memories for the NBA legend, who turned 72-years-old Tuesday.

The Bucks are the No. 1 seed in the NBA. The last time that happened was in 1974with Abdul-Jabbar here.

And Giannis Antetokounmpo is a strong candidate to be the MVP. The last time a Buck won that award was 1974, when Abdul-Jabbar won his third.

In an interview before Game 1, Abdul-Jabbar said he thought the Bucks were the front-runners to win the title this year because they were consistent all season. The fact the Bucks had only lost back to back games once all year impressed him.

“That shows me this is a team with focus and some determination,” said Abdul-Jabbar. “They embrace the way the game is played now, stretching the court, and they have people that can do that. And they have Giannis, who is an awesome point forward.

“If they continue to play like that? With that type of focus and that type of hunger, they’re going to have another championship banner hanging in the arena.

“Which is good because the one we put up there is real lonely.”

That he got to see in person during Game 1 at Fiserv Forum. Abdul-Jabbar also took notice of the physical changes in the city landscape. While the building he played in, the UW-Milwaukee Panther Arena (the Milwaukee Arena in Abdul-Jabbar’s day) is still standing, the Bradley Center is being demolished and bustling development downtown surrounds a franchise that has similarly been reborn.

“I think it’s great that Milwaukee is trying to re-think everything,” said Abdul-Jabbar.

It’s important, because sports is “the way that Wisconsinites relate to each other,” he said.

Full post and photos on JSOnline.com
Posted in News, Sports

Kareem Abdul-Jabbar: ‘Just Mercy’ and the Difference Between Black and White Legal Dramas

My NBA dream team of the next decade