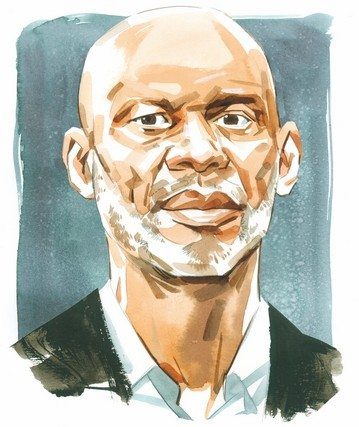 In the 1980 film Airplane!, the basketball legend Kareem ­Abdul-Jabbar plays the co-pilot Roger Murdock to Peter Graves’s captain Clarence Oveur. In one scene of the beloved oddball comedy, a child tells Abdul-­Jabbar’s Murdock character: “Wait a minute. I know you. You’re Kareem Abdul-Jabbar. You play basketball for the Los Angeles Lakers.”

“I’m sorry, son, but you must have me confused with someone else. My name is Roger Murdock. I’m the co-pilot,” ­Abdul-Jabbar tells the child.

Back and forth they banter, with the child insisting that the co-pilot is ­Abdul-Jabbar and Abdul-Jabbar insisting he’s Murdock, until the child tells him: “My dad says you don’t work hard enough on defence. And he says that lots of times, you don’t even run down court. And that you don’t really try … except during the play-offs.”

“Listen, kid! I’ve been hearing that ever since I was at UCLA. I’m out there busting my buns every night. Tell your old man to drag Walton and Lanier up and down the court for 48 ­minutes.”

It’s funny because in 1980, ­Abdul-Jabbar was one of the most instantly recognisable faces in America for his exploits with the Lakers. It still resonates nearly 35 years later, because given his pursuits after basketball, if he had wanted to be a pilot, he probably could have done it.

It takes a truly larger-than-life figure to develop a celebrated public career in acting, writing, advocacy and even statesmanship, all after a basketball career that included more points and minutes played than ­anyone else in the history of the game.

opens in a new windowRead Full Article at The National