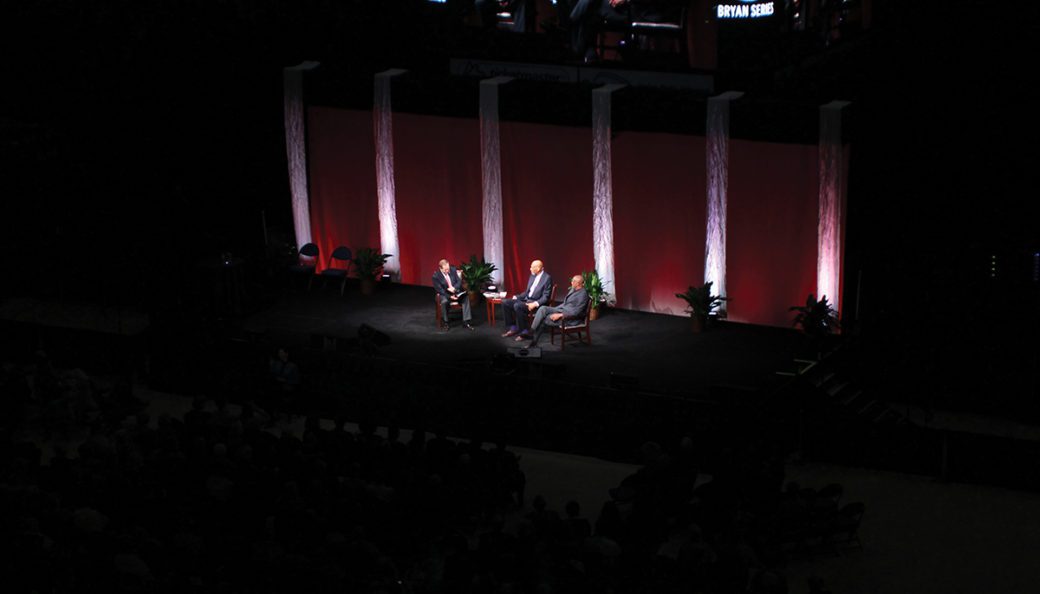 For the second event of the 2018 season of the Guilford College Bryan Series, Kareem Abdul-Jabbar talked about both his basketball career and post-NBA life. The event was held at the Greensboro Coliseum on Tuesday, Oct. 23.

Abdul-Jabbar is a former Hall of Fame college and professional basketball player. He played 20 seasons in the NBA between the Milwaukee Bucks and Los Angeles Lakers, during which he won six NBA championships and was a 19-time all-star. Since leaving the NBA, Abdul-Jabbar has been involved in many aspects of social commentary, having written 14 books, contributing columns to newspapers like The Guardian and producing documentaries, culminating in his reception of the Presidential Medal of Freedom award from former President Barack Obama in 2016. This award is the highest level of honor a civilian can get.

“I think he’s a person who builds off foundation,” said Jane Fernandes, President of Guilford College. “His curiosity drives him to go higher. He told our students today to start on the ground floor and build their way up.”

Abdul-Jabbar credits his passion for knowledge in part to his father.

“I would have to say my love of knowledge and reading came from my father,” said Abdul-Jabbar. “There was always a large amount of books and magazines in my house and I was curious. They opened me up to a whole world”

As for teachers who inspired him, Abdul-Jabbar credits both of his parents.

Abdul-Jabbar was also asked if he thought he ever might become a teacher.

“Oh yeah,” Abdul-Jabbar said. “But that kind of all died when I realized I was gonna get to go to college and maybe the NBA to make some real money.”

A lot of Abdul-Jabbar’s social work has also included getting minorities involved in science, technology, engineering and math.

“Too many young people, especially people of color, think they have to do something criminal or dishonest to get ahead,” Abdul-Jabbar said. “That’s not true. All you have to do is pay attention in chemistry class.”

Among the 14 books Abdul-Jabbar has written, two were highlighted during the presentation, the first of which was Abdul-Jabbar’s memoir, “Becoming Kareem.”

“‘Becoming Kareem’ was about the people in my life, helping me to become who I was,” Abdul-Jabbar said. “It wasn’t always positive, sometimes I learned some negative lessons from watching people I admired.”

The presentation also talked about Abdul-Jabbar’s fiction series about Sherlock Holmes’ older brother, Mycroft. In novels “Mycroft Holmes” and “Mycroft and Sherlock,” Abdul-Jabbar and his coauthor Anna Waterhouse detail the stories of Mycroft and his investigations into the mysterious events occurring in his community in England and Trinidad.

“When I was a kid, me and my boys would watch the Sherlock Holmes series,” Abdul-Jabbar said. “Up until I got to high-school and had to read ‘The Red-Headed League,’ I thought Sherlock Holmes was a real person.”

Abdul-Jabbar was also joined onstage for a portion by M.L. Carr ’73, a retired NBA player who played for the Boston Celtics, a rival of the Lakers at the time.

“We are in the presence of a giant,” said Carr. “I’m not talking about his size or all of his accomplishments on the basketball court”

Despite playing each other for many years, Carr had nothing but good things to say about Abdul-Jabbar.

“He was someone you had tremendous respect for,” Carr said. “There was something deeper about him when he played the game.”

Both reflected on NBA and how things have changed, who their toughest matchup on the court was, and most importantly, what advice they have for young people.

“My advice to the young people is patience” Abdul-Jabbar said. “Take the time to figure out that next step. Take an extra day. Take and extra moment.”

“I think the most important thing is to understand that asking for help is a sign of strength,” Carr said.

“You can’t give into fear or anxiety,” Abdul-Jabbar said. “You gotta go for it.”

Abdul-Jabbar has appeared in a number of movies and documentaries, including a special appearance on the television show, “Dancing with the Stars.” However, Abdul-Jabbar expressed that all of this is not what he is most enjoying.

“What I’m enjoying the most is seeing my children do well,” Abdul-Jabbar said. “They are starting to make their own mark on the world.”

Full article on opens in a new windowGuilfordian.com