‘What Color Is My World?’ shows youngsters African-Americans’ roles in science and technology

A page from Kareem Abdul-Jabbar’s book ‘What Color Is My World?’ 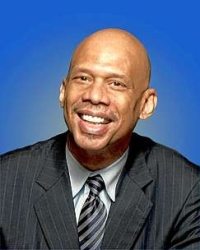 What do the inventor of the potato chip, open-heart surgery and the induction telegraph have in common?

They were all African-Americans. And all three (among many others) are featured in the newest book by basketball-great-turned-historian Kareem Abdul-Jabbar, “What Color Is My World?: The Lost History of African-Americans.”

Written for children of middle-school age, the book highlights little-known achievements by African-American innovators, while continuing Abdul-Jabbar’s interest in a version of U.S. history that is, as he has put it, not all “Thomas Edison and other white guys.”

Speaking of Edison: “What Color Is My World?” gives due treatment to Lewis Howard Latimer, who toiled under Alexander Graham Bell and worked on many of the innovations for incandescent lighting that Edison would later incorporate into one of the great inventions of modernity. But while Edison went on to immortality, Latimer was thanklessly relegated to oblivion.

So was Joseph Lee, who invented the bread machine; and Lloyd Hall, an innovator of food preservation; chemist Percy Julian; and gamma cell inventor Henry Sampson. They, too, have been deleted from the history of American achievement.

Co-written with Raymond Obstfeld, with lush illustrations by Ben Boos & A.G. Ford, the book pushes back against what Abdul-Jabbar calls a poisonous logic: that African-American kids “only see themselves able to succeed in two areas: sports and entertainment.”

It becomes a self-imposed, socially reinforced limitation, he says. “They totally neglect their intellect. They either want to be Jay-Z or LeBron James.”

Since his retirement from basketball, Abdul-Jabbar has done much to subvert that narrative, writing numerous books and working with his Skyhook Foundation to foster a greater respect for education among inner-city youth.

“Engineers and scientists and mathematicis can be heroes too,” Abdul-Jabbar says in earnest. They sure can. And in his newest, most colorful book, they surely are.