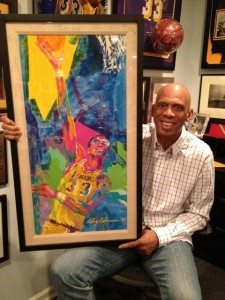 LeRoy Neiman was one of the greatest visual stylists in America. His depictions of athletes and sporting events were instantly recognizable in his unique style. After being portrayed by Mr. Neiman, a person was considered to have “made it.” He was a fixture at all of the events where the beautiful people spent their time. The colorful style that he used became a part of how important sporting events were remembered. I was flattered to receive a depiction of me shooting a skyhook done by Neiman from my teammates after I broke Wilt Chamberlain’s scoring record. It is a prized possession and it will be a reminder of the times that I spent with Mr. Neiman talking about any number of events. He will be remembered for a long time and his legacy of works will be treasured by all who were fortunate to have one.