Lakers take round One 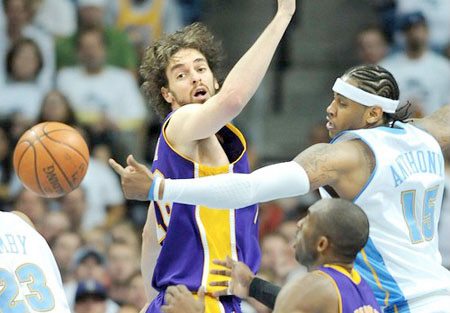 Lakers have taken a step forward in beating the Denver Nuggets in round one of the Western Conference playoffs. The ability to eliminate the Nuggets – 50 game winners this season – was a major indication of their improvement this year. First round exits in 07 and 06 were very disappointing for the Laker faithful. Expectations can only grow if the Lakers continue to win in this fashion.

The most obvious improvement for the Lakers has been their ability to share the ball. The high ratio of assists to baskets in always a sign that the team is in sync and eager to help each other. Denver, for its part, has not done well in the team aspects of the game. They haven’t worked the ball into positions for easy shots and they’ve settled for the quick long range jump shot. Those shots aren’t falling and the Lakers advanced because of it.

Denvers seems to have resorted to one on one play as a response to the challenges they faced and things did not work out for them. Carmelo Anthony was particularly unable to contribute for the Nuggets. JR Smith and Allen Iverson gave it the college try but the Lakers had an answer to every effort the Nuggets made. Kobe Bryant was spectacular at crunch time and he singlehandedly held off the Nuggets in the final minutes of the game, his presence alone was the decisive factor in those moments.

For the first time in my memory, I saw Kobe struggle at the free throw line. But that was no consolation for the Nuggets. They were unable to take advantage of any openings. I’m sure the next round of the playoffs will be more competitive but I think the Lakers are on a roll.