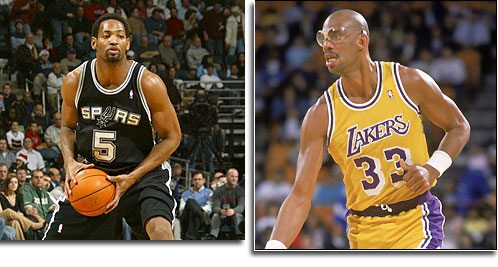 On the Lakers Game 4 Performance

They got themselves in a tough situation on the road and they got a little intimidated by the crowd and being away from home, just not wanting to be there and fight their way in an uphill battle. But that’s what it’s like when you’re on the road. It surprised me because they’ve played Utah pretty tough this season. In fact they were one of the few teams to beat Utah in Utah this year. I thought that would not be a factor. For example, if they shot their free throws like they shot them in the first half, they win the game. It was amazing how the crowd affected their performance across the board.

What the Lakers Need to Do to Win Game 5

I expect the Lakers to put their Game 4 performance behind them and come out and play hard and intelligently like they usually do. The goal is to try to win one here and set themselves up to, even if they can’t win in Game 6, make sure that they return to Los Angeles for Game 7 if it’s necessary.

I think Jordan’s problem is he’s having a very difficult time defensively. Deron Williams is a very difficult assignment for him.Deron is stronger than Jordan and just as quick. He’s got serious upper body strength and he just blows by Jordan. It’s a real problem.

The Second Round Homecourt Advantage

The homecourt advantage is something that some people rely on. Teams that are able to focus and win on the road are dominant teams. Maybe it has something to do with the parity that the NBA has tried to foster.

I got to see Jerry Sloan play against Oscar Robertson. We were in the same division with them when Jerry was with the Bulls. Just the physical battle that he had with Oscar, those were classics. Jerry was a hard nosed guy and he saw Oscar as a challenge. Every time he had an opportunity he went out there and gave Oscar his best.

It was something worth watching. Oscar had success against everybody. No one could stop him. But Oscar would acknowledge that Jerry was one of the people who never ever said die. Jerry is that kind of guy. He brings it all on the court. I have a lot of respect for Jerry.

The Difference in Coaching Styles of Sloan and Phil Jackson

They are totally opposite, as opposite as they are in personality. Jerry is just a hard nosed guy who understands the fundamentals of the game and teaches his team how to win. It doesn’t strike me that he is into a whole lot of X’s and O’s. His offense is pretty simple and it’s all about his team executing the offense. Phil’s X’s and O’s strategy is a little bit more involved. I have never seen Jerry coach on a daily basis so it’s hard for me to assess how he does it, but I think Phil’s approach is more involved and has a lot of strategy. He spends a lot of time working on the triangle. Phil feels that if they run the offense efficiently and with everybody doing what they should be doing, it sets them up to play good defense and give them an opportunity to dominate the other team.

Byron has done a great job everywhere he’s gone. He was doing a fantastic job in New Jersey and they fired him. I didn’t get that. I am glad he got the opportunity in New Orleans. The team has responded. Nobody gave him what would be considered a bunch of All-Stars but he’s got them operating on the same page and getting it done. That to me is all the credit to Byron. He certainly earned his Coach of the Year Award. I didn’t see or hear anything while he was playing to lead me to believe that he would become a coach, but when I was with the Clippers in 2000 and Byron was with the Kings I got a chance to go sit with him for a minute the couple times that we played them. He was enjoying himself and Coach Adelman thought he was a great addition to his staff. At that point I thought that Byron would have some future in coaching and when he got his opportunity he did a great job with it.

Robert has been around because he understands how the game evolves over the 48 minutes. He knows how to do the right thing at the right time. He always seems to be at the right place at the right time to help his team win. He has had many standout shots in his career, but the one that stands out for me came against the Kings in Game 4 of the 2002 Western Conference Finals because of how fortunate he was on that play. Vlade Divac could have controlled that rebound but he just took it and threw it out of the paint and it went right to Robert Horry. If he tries to control that rebound and smothers it, Robert Horry doesn’t get that chance. So I attribute that one to Vlade Divac not understanding what he needed to do. Some of the other ones like when he was with Houston show that when the game comes to him he does good things with his opportunities. He seems to thrive on rare opportunities. Every time he gets it he does something great with it. He’s got to be a fan favorite for it.

As far as the Hall of Fame goes, you have to look at the whole career. His career in the playoffs has been remarkable. You look at the regular season, you might come to a different conclusion, but you can’t take away his success.

Robert is on the verge of passing my mark for the most games played in the playoffs. But we’re talking about two different eras. When I first started playing, if you won the world championship you only played in three rounds of playoffs. So it was an opportunity for him and he’s made the best of it.