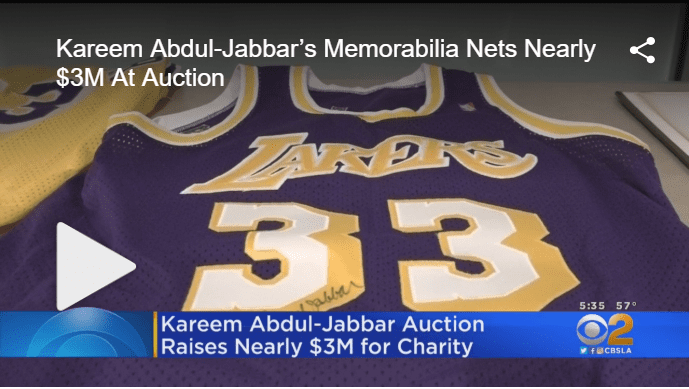 LOS ANGELES (CBSLA) – Dozens of prized memorabilia from the storied career of Lakers legend Kareem Abdul-Jabbar sold for nearly $3 million at auction Sunday, with all the proceeds going to his charity. According to ESPN, Abdul-Jabbar sold four of his six NBA title rings, three of his six MVP trophies, a signed basketball from his last game, several jerseys, his signature goggles and countless more items for a combined $2,947,872.

Last week, Kareem-Jabbar told CBS2 that he was putting everything on the auction block to raise money for his charity, the Skyhook Foundation, which helps bring STEM (Science, Technology, Engineering and Math) educational opportunities to children in underserved communities.

“It’s nice having a great sports legacy,” he said. “But I can leave a legacy of giving back to my community through this program. The program is working.”

In a blog post, Abdul-Jabbar disclosed that he was on “a solid financial path” and was not auctioning the items because he was facing any financial difficulties.

Instead, Abdul-Jabbar told CBS2 that he feels “a lot better that I use these things in a way that benefits people.”

“When it comes to choosing between storing a championship ring or trophy in a room, or providing kids with an opportunity to change their lives, the choice is pretty simple,” Abdul-Jabbar wrote in his blog. “Sell it all. Looking back on what I have done with my life, instead of gazing at the sparkle of jewels or gold plating celebrating something I did a long time ago, I’d rather look into the delighted face of a child holding their first caterpillar and think about what I might be doing for their future.”