The Hollywood Reporter: Why the Trump Era’s Movie Villains Are “Morally Woke” 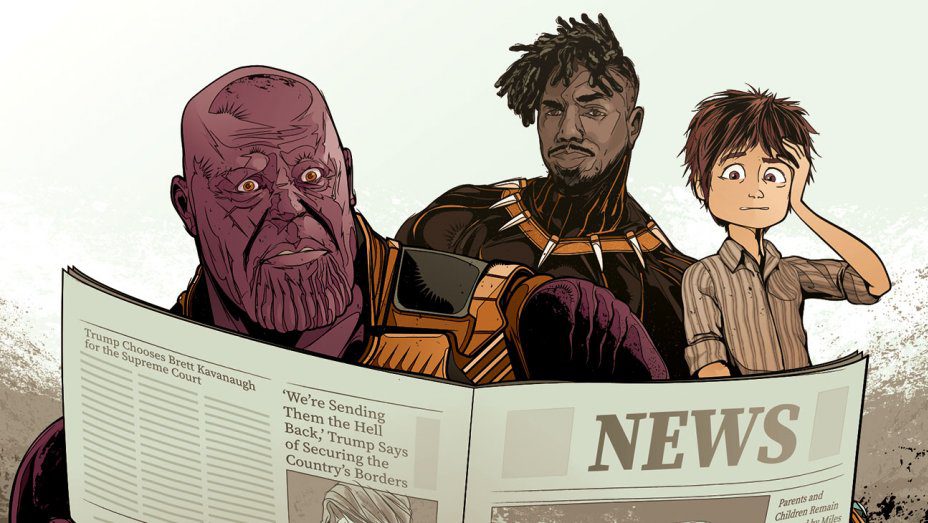 From ‘Black Panther’s’ Killmonger to ‘Incredibles 2’s’ Evelyn Deavor, this year’s big-screen baddies are more “conscionable” than the evildoers in the White House and reflect the ultimate problem: “Those who let this despairing situation come about: us.”

The three most popular movies of the past few months — Black Panther, Avengers: Infinity War and Incredibles 2 — have presented a curious but revealing shift in movie villainy. These baddies are not the usual suspects: creepy, cat-stroking, cackling Bondian psychopaths obsessed with world domination to feed their insatiable appetite for power. Instead, this new breed of sympathetic villains is motivated not by avarice but by social injustice.

Their justifications for their evil deeds force the audience to wonder whether they really are evil douches or just dark visionaries with savior complexes — and whether this trend is just a coincidental pop culture hack or a reflection of our current political climate under the stormy leadership of President Trump.

It’s not that we haven’t experienced this type of conscionable criminal before, it’s that now we are experiencing it more frequently and with more intensity, which suggests a new underlying deliberate or unconscious message about the state of our world. This sudden shift to villains who are morally woke — even if their methods are extreme — is a reaction to the harsh reality that the greedy overlords of moral anemia, as represented by Trump’s draconian policies, already are in power.

The Dr. Nos and Ernst Blofelds are roaming the White House putting toddlers in cages, attacking news organizations, suppressing the rights of the marginalized and generally dismantling American values at will. Since the traditional villains have won, who then will fulfill the role of villain in our stories?

Black Panther‘s Killmonger alchemizes his father’s death into helping oppressed people of color around the world rise up in armed revolution. Thanos from Infinity War wants to free people from the poverty and inevitable extinction caused by overpopulation. Evelyn Deavor in Incredibles 2 is passionate about releasing humans from the enslavement of technology, particularly the screens we stare at all day. Although their violent methods make them evil, they aren’t wrong about the social problems they want to fix.

Killmonger is right that many of the oppressed people of color around the world are kept in poverty because they don’t have the means to fight those who exploit them. Americans were once an oppressed people, and without weapons, we would never have formed the United States. Is it wrong to deny others the same opportunity to rise against their masters?

Thanos is right in pointing out the massive devastation caused by overpopulation that threatens to destroy everyone eventually. If the lifeboat is overcrowded to the point that it might soon sink, do you wait for everyone to drown or do you throw some over in order to save others? Evelyn Deavor expresses a common concern that technology is alienating us rather than bringing us together. Studies show that social media outlets like Facebook and Instagram actually make people unhappier about their lives. So, while these villains aren’t exactly cuddly, they are relatable, even as we find their methods deplorable.

Heroes still do what heroes always do. They bring back order to the world from those who wish to force change on us. The real villainy is forcing anything, whether good or bad, upon us without our consent. These social evils that the villains are addressing are the result of our own complacency, which makes us complicit. The evil deeds perpetuated under our watch are our responsibility and therefore ultimately our fault. These stories are meant to challenge our political values because the administration of Donald Trump has created a challenge to American political morality.

Our villains no longer are a warning of what horrors might come should they succeed but an exploration of our own collusion and collaboration in propelling our current leaders to power and allowing them to lessen our rights, alienate our allies, cozy up to our enemies and privately amass huge personal profits from their policies.

Even though the heroes in these three movies defeat the villains, the problems that the villains tried to solve are still there, ticking away like time bombs. We may come out of these films feeling good that evildoers have been defeated, but the evil itself hasn’t gone anywhere. The real villains of these movies are those who let this despairing situation come about: us.

We want to be good, we just don’t want to be bothered to do good. We think pledging allegiance is the same as taking a public stance that actually defends the principles of the Constitution. As Solomon Lane, the villain of Mission: Impossible — Fallout, says: “The end you’ve always feared is coming, and the blood will be on your hands. The fallout of all your good intentions.” Or, as Pogo put it, “We have met the enemy and he is us.”

Read more at The Hollywood Reporter