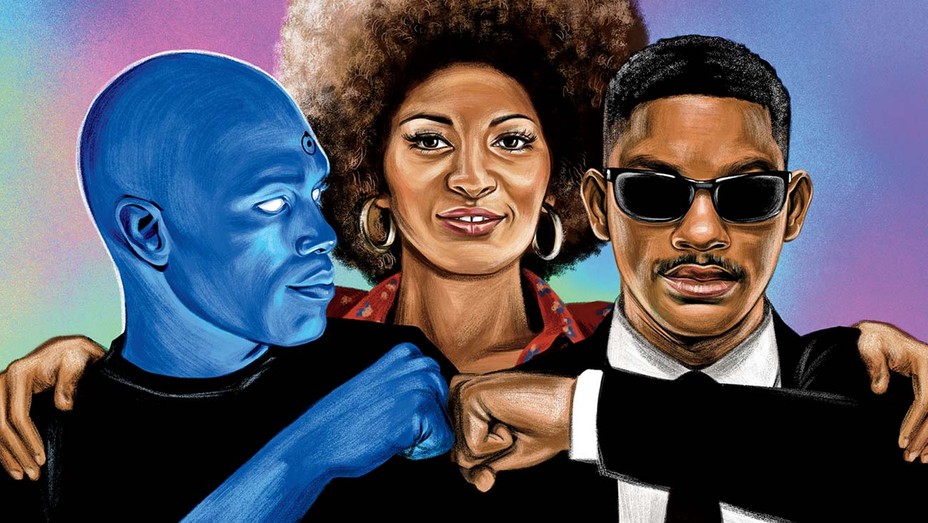 Hollywood’s usual reaction to social protest is to produce a few sincere dramas about the African American experience, but “the real measure of a group’s acceptance by society is when its people are celebrated in popular culture.”

When Black Lives Matter started rocking, Hollywood came a-knocking. Considered the largest protest in American history, BLM, which started a few years ago, jolted a cultural nerve, particularly after the police killing of George Floyd. Celebrities and studios released statements of support. Donations were made. Some who’d made racist comments in the past were fired. New projects featuring Black actors, writers and directors were announced. All very good signs of a new dawn of equality, though some people — myself included — have been pointing out for years that when it comes to inclusiveness, Hollywood’s foot-dragging has been worse than that of Pulp Fiction‘s The Gimp. Why now as opposed to these past few years? Is Hollywood merely surfing the zeitgeist to garner goodwill, or is it truly committed to the long-term struggle?

Hollywood’s usual reaction to popular social protest is to produce a few Black-centric films or television shows. These are generally “prestige” productions highlighting past and present injustices that elicit tears of pity, outraged head-shaking and a chorus of rafter-rattling “amens!” or stories about the horrors of slavery, the perils of growing up in the ghetto or the hidden groundwater of racism flowing beneath the suburbs. These are necessary because they fill in the gaps in African American history that many of our schools tend to distort or ignore. But I fear they preach only to the choir, because the All Lives Matter mob who need to see these truths don’t want to watch them.

The real measure of a group’s acceptance by society is when its people are celebrated in popular culture, which reaches a broader spectrum of individuals. When a group consistently appears as heroes in genre stories, this means they’re no longer imprisoned in the literary ghetto of being portrayed as downtrodden victims, idealized as either martyrs or saviors.

Since the end of blaxploitation films in the 1970s, the Black kickass hero pops up every now and then like a whack-a-mole, gets cheered for even existing and then is hammered down out of sight.

Jordan Peele’s Get Out and Us and Ryan Coogler’s Black Panther helped launch a new wave of Black genre stories. The late Chadwick Boseman’s portrayal of Black Panther elevated not only a single Black man as heroic but the entire history of Black culture and community through the portrayal of a fictional Wakanda. Project Power, Lovecraft Country, Antebellum and Watchmen nicely continue celebrating the Black adventure hero. In HBO’s Lovecraft Country and Watchmen and the movie Antebellum, the supervillain is racism, manifested in groups of entitled whites. Lovecraft Country and Watchmen do an excellent job of developing complex characters in exciting and suspenseful plots. Although both have supernatural elements, we never lose sight of the protagonists’ humanity forged by their experiences as Black Americans. Ironically, Lovecraft Country is set during the 1950s and Watchmen in the future, but systemic racism determines their plots. Yet neither is preachy.

The Netflix movie Project Power is more a straightforward sci-fi family-friendly adventure. Jamie Foxx plays a former soldier trying to stop an evil cartel from selling pills that give the users unique superpowers for five minutes. It’s low on social criticism and high on gritty fun, focused on showing Foxx’s convincing ability to be a Die Hard-type hero.

Lionsgate’s Antebellum is less satisfying. The plot is more mundane and silly, and its racial elements seem like cardboard props. The real payoff here is the intensity of Janelle Monáe’s performance as she outwits her captors and fights her way to freedom. Someone get this woman a Marvel costume!

Why does having Black genre heroes matter? Because our stories provide role models that influence how our children measure themselves and their potential. Diverse action heroes help youngsters define the range of characteristics they see in themselves. If a Black child never sees a Black mountain climber or world-saving scientist, they tend not to envision that as a possible path. Also, the fewer people who look like you that you see on the screen, the less valuable you think you are to society — and the more powerless you feel. We can learn a lot about this from educational research: A 2019 study from the Brookings Institution found that students’ success was affected by whether there were same-race teachers at their school. If there were, the students did better. The same with heroes of the same race, gender, gender-identification or nationality.

I hope these Black-fronted genre projects are part of a new industry commitment to inclusivity, not merely a temporary blip. I’m grateful whenever Hollywood lends its shoulder to roll another giant boulder of discrimination off Freedom Road. It’s just that the past has shown us how quickly people who aren’t directly marginalized get weary of shoving that weight. But if your shoulder’s not always pushing against those rocks, you’re allowing them to block the path to equality for others. That’s not what heroes do.

This story first appeared in the Sept. 16 issue of The Hollywood Reporter magazine.  opens in a new windowClick here to subscribe.