Kareem Abdul-Jabbar Telling The Story Of The Harlem Renaissance 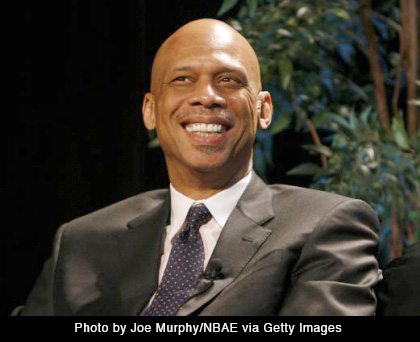 Kareem Abdul-Jabbar is intent on changing that.

The 63-year-old Hall of Famer has co-written and is the executive producer of a documentary called “On the Shoulders of Giants.” It tells the story of the Harlem Rens, an all black professional basketball team that defeated the Original Celtics for the world basketball championship in the 1930s.

“The primary reason that I did it was because the early days of professional basketball are almost totally unknown now to the public because it happened so long ago,” Abdul-Jabbar, in town for the Final Four, said in an interview with The Associated Press. “There’s no footage. It’s just fallen through the cracks of history.”

The Rens, who competed from the 1920s until 1949, were named after Harlem’s Renaissance Casino and played in its second-story ballroom. Jazz greats including Count Basie and Cab Calloway played at halftime of the Rens’ games, and they’d come on again after the game for a dance that lasted until the wee hours of the morning.

Abdul-Jabbar, who was born and grew up in Harlem, said he didn’t learn of the Rens until the summer before his senior year in high school.

The movie is currently available on Comcast on demand but is set to be released on Netflix in May. It features music by artists including Chuck D of Public Enemy, will.i.am of the Black Eyed Peas and Herbie Hancock. Jamie Foxx narrates the film, and a star-studded list of people, including Spike Lee, Samuel L. Jackson, Carmelo Anthony, Charles Barkley and Bill Russell, appear in it.

He said it was easy to get so many people to lend a hand with the film.

“There are a lot of people who like the sport who I know and who have something relevant to say with regard to where the sport is today and where it’s come from,” Abdul-Jabbar said. “So I was able to get people to say a few things about what they knew about the Rens and give them a little bit of the recognition that they deserve.”

The documentary also features an interview with John “Wonder Boy” Isaacs, a Ren who died in 2009.

The impact of the Rens, who were enshrined into the Naismith Memorial Hall of Fame in 1963, is far reaching, and Abdul-Jabbar said even the late John Wooden, his coach at UCLA, was influenced by the team.

“Coaches would bring their staffs to watch them play so they could figure out a way teach the game,” Abdul-Jabbar said. “That’s how well they played the game. My own coach John Wooden, he played against them in the 1930s. He played for a professional team in Indianapolis. He remembered how they played and tried to incorporate some of their expertise in his coaching philosophy.”

Abdul-Jabbar was most struck by the obstacles the Rens had to overcome in playing in a time when America was segregated.

“They couldn’t travel like everyone else,” he said. “They couldn’t stay in hotels. There was no guarantee that would be able to eat at a restaurant, and sometimes people wouldn’t sell them gas because they were black. It was a very different time in this country and very difficult to be a person of color and try to function in America. Yet they dealt with all of that just for the opportunity to play basketball.”