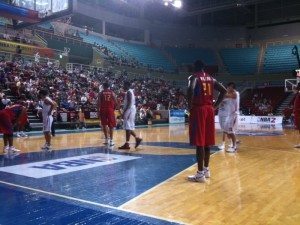 opens IMAGE file LOS ANGELES, September 8, 2009 – Kareem Abdul-Jabbar participated in the first-ever NBA Asia Challenge featuring two exhibition games that include NBA Legends and NBA D-League players against Korea Basketball League (KBL) players in Seoul on September 5 and in Incheon on September 6.  Abdul-Jabbar is blogging about his experience at opens in a new windowwww.kareemabduljabbar.com as well as providing regular updates via Twitter at opens in a new windowwww.twitter.com/kaj33.

“The KBL All Stars shot the ball very well from the three-point range and our team was not able to defend their outside shooting effectively” stated Abdul-Jabbar following the NBA Generations team 114-98 loss.  “We will have to play better defensively if we are going to win the next game.” 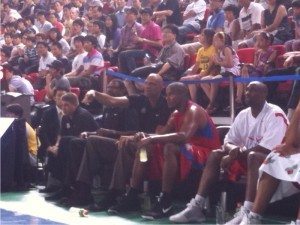 The NBA Asia Challenge was the first sporting event held in Korea’s largest basketball arena, the Jamsil Indoor Stadium, following a summer renovation.  The NBA Legends and NBA D-League Futures played the KBL All-Stars in Seoul on September 5.  The KLB All-Stars were led by Ha Seung-Jin of the Jeonju KCC Egis, Lee Sang Min of the Seoul Samsung Thunders and Bang Sung Yoon and Joo Hee Jung of the Seoul SK Knights.   The KBL All-Stars beat the NBA Generations team 114-98. 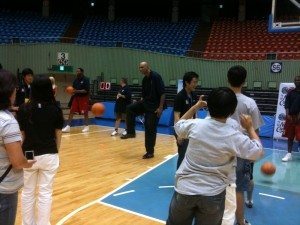 opens IMAGE file The second game took place at the Incheon Samsan Gymnasium and featured the NBA Legends and NBA D-League Futures against Incheon ETLAND Elephants, a KBL playoff team last season. Kim Sung Chul of the Incheon Elephants scored 15 points in his team’s 94-82 loss. The NBA Generations team was led by 27 points from Billy Thomas along with 10 points and 5 rebounds from Dominque Wilkins.

Continuing his philanthropic efforts to give back to society as well as the game of basketball, Abdul-Jabbar participated in a NBA Cares community event held in Seoul.  Images from the Cares event are available on opens in a new windowwww.kareemabduljabbar.com .  Since it began in 2005, NBA Cares has created 425 places where kids and families can live, learn or play in 20 countries across five continents.