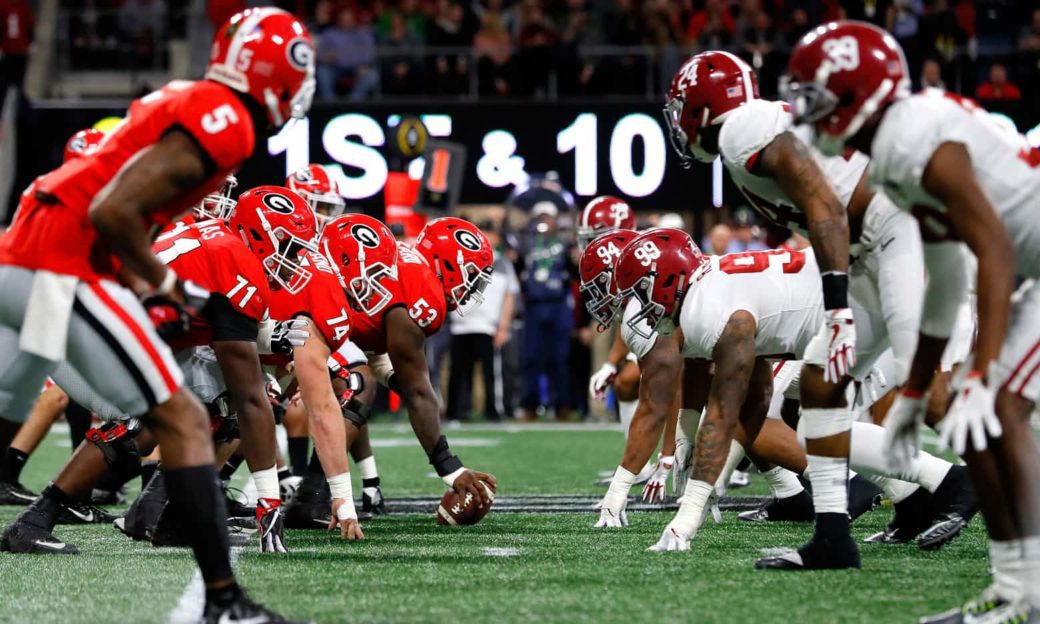 In Thailand, bony little boys as young as nine and 10 are thrown into the boxing ring to punch each other into bloody submission while parents, relatives and other screaming adults bet on the outcome. Youth sports or child abuse? While most Americans feel outrage and revulsion at the idea, as a culture we are just as willing to toss our college-age kids into the gladiatorial arena to risk life and limb while we snack, guzzle and wager on the outcome. All while compensating the young athletes who are at risk with – relative to the money being made by sports barons – about the same as little kids we used to send into coal mines earned: a few coins and lots of chronic ailments. Sound too social justice warrior hyperbolic? During the three weeks of March Madness basketball last year, the NCAA earned $900m dollars while $9.2bn was gambled on the outcome. The players banging it out on the courts earned zip. Nada. Nothing.

I’ve been writing about this issue for several years now calling for college athletes to be paid the wages that they deserve and am sad to acknowledge that very little has changed since I was a college athlete at UCLA, so poor that I and most of my teammates could barely scrape by. But just as with every injustice, wrongs don’t get righted unless we keep raising our voices again and again. So, once more unto the breach, dear friends, once more.

For those of you who think the life of a college athlete is all glitter and glamour, you couldn’t be more wrong. If you came to college from a family with money than you were fine, but if you came on an athletic scholarship from blue-collar working families, then it was tough going. It wasn’t hairshirts and gruel, but it wasn’t nightly yacht parties and frat keggers either. It was mostly holing up in the dorms at night because you couldn’t afford to go out and you needed a lot of rest after punishing practices. There’s nothing wrong with living lean as a college student: it keeps you focused on your studies and teaches you discipline and the joys of being frugal. However, athletes must focus on their studies while also working a more than full-time job in the gym.

Playing basketball at UCLA was a seven-days-a-week job, involving intense practices, learning new plays, playing home games, and traveling around the country to compete against other schools. Our efforts earned millions of dollars for the university, both in cash and in recruiting advertisement to attract new students. But I was generally too poor to do anything but study, practice and play. The little spending money I managed to scrape together was earned on summer jobs. That money had to get me through the whole academic year. It was frustrating to win championship after championship every year, hear thousands chant my name, and then go to my bedroom to count my change so I could buy a burger.

What made it even worse was that students with academic scholarships were allowed to work jobs during the school year while we were forbidden to. And if we were injured seriously enough that we couldn’t play anymore, our scholarships were revoked, despite the medical bills adding up. We were only as valuable as our ability to tote that ball and lift that score. Our coach, John Wooden, was sympathetic, but he made it clear that the NCAA would not change their policies. They were, he said, “immovable, like the sun rising in the east.”

Here we are nearly 50 years later and the arguments for and against haven’t changed. Portland Trailblazer Shabazz Napier described his experience as a college point guard in 2014 that was eerily, and sadly, so close to mine: “We do have hungry nights that we don’t have enough money to get food in. … Sometimes, there’s hungry nights where I’m not able to eat, but I still gotta play up to my capabilities.” The only thing that has significantly changed is that the NCAA, television broadcasters, and the colleges and universities are making a lot more money.

Top college coaches make between $4m and $9m per year, plus outside fees. In 40 out of the 50 states, they are the highest paid state employees. Of course, coaches in less profitable sports, such as baseball, make far less. And only a third of Division I men’s basketball programs are profitable. These facts are tossed in our faces like sand to blind us to the awareness that other programs, like football at the University of Texas made $92m in profit in 2015, making it more profitable than most NFL teams. Yet, their players made nothing. Some apologists claim that the value of the scholarships, training, and other considerations give the players $50,000 to $125,000 a year in value, if not in cash. Plus, the best players get the invaluable publicity that they can cash in for big bucks when they turn pro. I certainly benefited from it. However, the reality is that, the chance of turning pro after college is less than 2% (except in baseball, which it’s 11.6%).

Race is definitely a factor in determining which side people support. A 2017 HuffPost/YouGov survey showed only 27% of whites strongly or somewhat are for paying college athletes. However, 52% of African-Americans strongly or somewhat support paying. Why the divide along racial lines. A study in Political Research Quarterly concluded that “harboring negative racial views about blacks was the single strongest predictor of white opposition to paying athletes.” There are other divides: men support paying college athletes more than women do, Democrats more than Republicans, adults under 30 more than adults 65 and older. But race is the largest percentage difference.

There are two reasons for this difference of opinion along racial lines. First, in basketball and football, which generate the most income, a large percentage of players at Division I schools are black. Their families, and the rest of the African-American community, don’t want to continue the same policies of having their efforts exploited while others profit. Second, white Americans who don’t have the same financial pressures think that receiving a sports scholarship is enough reward. Grand Valley State University professor Louis Moore, who studies African-American and sports history, observed, “In a sense, most whites see the black athlete and his presence in college as a gift. [He is] somehow getting a favor, and this is somehow not work.” But scholarships depend on one’s ability to play and they may be taken away in cases of severe injury. This leaves the student without the ability to play or earn an education.

The short list of opposition reasons would not stand up in any college logic class. They are startlingly similar to reasons not to pay minimum wages, not to have unions, not to ratify the women’s vote, and on and on. But those shaking their Cheetos-stained fists at the prospect of paying college athletes don’t care about the “elitist” rules of logic, they care about the profitable rules of bottom line or their blind allegiance to outdated tradition. As my old pal Henry V might say today, “Once more unto the breach, dear friends, once more; / Or close the wall up with our fallen, failed, or foresaken college athletes.”

Or maybe we should just set out a tip jar.