The NBA legend tells us how to inform kids

by The Editors – Grandparents.com 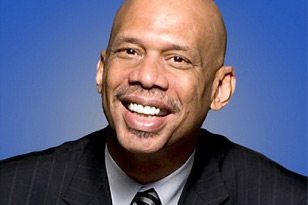 Since retiring from basketball, Kareem Abdul-Jabbar, the leading scorer in NBA history, has been devoted to engaging young people with history. He has written seven books, including the bestselling On the Shoulders of Giants: My Journey Through the Harlem Renaissance, co-authored by Raymond Obstfeld. His latest book for young people, also co-written with Obstfeld, is What Color Is My World?: The Lost History of African-American Inventors (Candlewick, 2012). Abdul-Jabbar, who was recently named a U.S. Global Cultural Ambassador, recently said about his new book:

“I think any grandparent who wants their grandchildren to know about Black History will find What Color is My World? to be a great gift. It has an important story to tell about black inventors who have made contributions to contemporary American life, like Lewis Latimer, who invented the carbon filament for the electric light bulb – making the electric light a possibility for the masses of people who were, up until then, burning oil lamps or candles. Any child who is into modern technology will also be interested in Latimer’s contribution to the telecommunications age because he drafted the drawing that Alexander Graham Bell used in his patent application for the telephone. Every kid who likes talking on a cell phone will want to learn about James E. West, who made cell phones possible because of his invention of the Electret Foil Microphone. 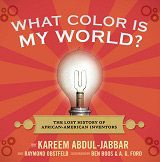 “In addition to learning about the devices that Black Americans invented, kids will also get an idea about the many obstacles these inventors overcame in their pursuit of equality and success. It’s important to remind young people about the long shadow of slavery and how, in the aftermath of the Civil War, newly freed Blacks were not allowed the rights and privileges of full citizenship. I hope all children can learn about all the contributions made by Black Americans that all people around the world enjoy. What Color is My World can start that conversation. Grandparents can and should be a key source of information to their grandchildren — they are living history themselves and play critical roles in showing kids how they can think and dream BIGGER.”

Abdul-Jabbar also took part in the following question-and-answer about What Color Is My World?:

This is your first book for young children. What was the genesis of the story idea?

KAJ: I was looking for a good way to make kids aware of how many objects in their daily lives were invented by African Americans. I wanted kids to have an appreciation for the cultural and ethnic diversity that makes so many comforts and necessities in their lives possible. A lot of kids think that Thomas Edison and other white guys invented everything, when in fact there were a lot more people involved who were a lot more colors of the rainbow.

Of all the underrepresented contributors to U.S. and African-American history, why did you choose to highlight inventors?

KAJ: Two reasons. First, I wanted kids to get excited about science and engineering as possible fields of study. The U.S. has been slipping over the years in our dominance in scientific discoveries. But we can show young kids that a career in science can be just as cool as becoming a pro athlete or a famous actor, and that it can affect the world a lot more.

Second, I want kids to be inspired by these inventors, most of who had to overcome extreme obstacles to achieve their dreams. Most of them were motivated not by the promise of big bucks and endorsements, but by their own natural curiosity and a desire to improve the world.

During the writing and research process for What Color Is My World?, were there any interesting or little-known facts that surprised you?

KAJ: Every time somebody picks up a potato chip, they should be thanking a black chef named George Crumb. It’s not just the chip they should think of, but also how this black man, at a time when it was safer to just do what was asked of him, invented the potato chip by standing up to one of the richest men in America. I love it when accidents change history.

What do you want readers to take away from this book?

KAJ: I hope that young readers will get an idea about how much black Americans have done to significantly contribute to everyday American life and culture.

If there was one thing you wished you had invented, what would it be?

What is the one thing you wish would be invented in your lifetime?

What’s one of the questions you get asked most by kids that is not basketball related?

KAJ: Kids don’t ever seem to ask me anything that isn’t basketball related!