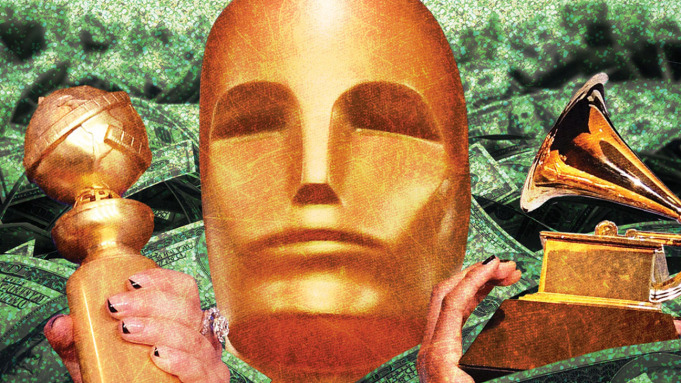 As the Globes, Grammys and the trophy circuit at large take heat from the likes of Tom Cruise, The Weeknd and even NBC, The Hollywood Reporter’s columnist asks if structural change can rescue award shows or if the whole process is simply too corrupt to save.

“The Golden Globes and Grammys have taken devastating public hits recently about their relevance as avatars of cultural appreciation. Are these coveted awards truly champions of new and innovative voices in their respective arts — or do they Build That Wall to protect only conventional notions of what art is and to silence the alternate cultural voices they wish to ignore?

With NBC bowing out of the Globes in 2022 and Tom Cruise returning his three trophies because of a lack of diversity and other questionable practices, the Hollywood Foreign Press Association has been forced to issue new guidelines, which have already been called window-dressing platitudes. After The Weeknd accused the Grammys of being corrupt and Elton John sided with him, the Recording Academy also changed its nomination process. The question is whether it’s enough or is there a deeper political and social bias in the infrastructure of recognizing art. (Spoiler alert: Yes, there is!)

You know something is fundamentally corrupt in an organization when it takes this much public pressure not just to instigate change that’s been demanded for years but for them to even acknowledge there might be a problem. It’s not like they woke up yesterday to the realization that there are severe inequities in society and that they have the power to address some of those inequities. They just preferred to pretend otherwise. If public pressure is the only thing to push these organizations to change, then they aren’t doing it out of a sudden awareness of their cultural conscience; they’re doing it because they are fighting for financial survival.

Of those awards organizations, only the Academy of Motion Picture Arts and Sciences made significant progress since its 2016 #OscarsSoWhite debacle, when all 20 nominations in the acting categories went to white performers for the second year in a row. As I wrote in a recent THR column, the Oscars got it right this year with noms that embraced a diverse group of artists and voices. Now we have to be wary of the “Obama Effect”: the belief that now that we’ve proved that we aren’t racist by electing a Black president, we can go back to being racist by suppressing Black voters. Social enlightenment, like democracy, requires eternal vigilance.

Part of the corruption lies in the purpose of giving awards for art forms that also are multimillion-dollar businesses. We’d be naive if we didn’t recognize that the main goal of these awards is not to celebrate the best and brightest — but to sell product. But that doesn’t mean we can’t do both. Who gets awarded translates into a major career boost that can mean millions of dollars. Awards recognition for movies, songs, plays and books can bump sales and launch careers. That kind of fiscal clout makes itself vulnerable to powerful influences who wish to benefit from a well-placed award.

That kind of power also carries the ability to promote the voices of marginalized people to the point where they become less marginalized. This is not a request for preferential treatment or a quota system but of making a true and sustained effort to stop excluding people whose experiences and art form may be different.

In basketball, it’s easy to determine who the best team is: the one that scores the most points. But judging art requires a set of criteria that is supposed to be objective but never is. In the best of all possible worlds, all art would be judged blindly, without any knowledge of anything about the artists — their gender, their ethnicity, their anything. Then we could evaluate a work based solely on its merits. But this ain’t that world. We all bring our personal preferences, tastes and biases when we judge.

Yet we have a right to expect those who form a jury — whether judicial or in the arts — to at least make a heroic effort to be fair in their verdict. I sometimes look at lists of best-selling recordings and realize I don’t recognize a few of the artists. I sometimes see a news article about a celebrity I’ve never heard of. But if I’m tasked to vote on the best movie, actor or song, I would make sure I’ve seen or heard every one of them, not just the ones that feed my personal preferences and biases.

Awards shows will always be controversial because good artists will lose to other good artists. Put a Picasso next to a Dali next to a J.M.W. Turner, and who gets best artist award? That’s fun controversy when we can argue about worthy opponents, championing our favorites but also not being mad at who won. Unless you fail to even include Black artists like Jean-Michel Basquiat or Jacob Lawrence or Lina Iris Viktor. It goes from fun controversy to furiously frustrating when the awards deliberately exclude worthy people based on lack of familiarity or because they exist outside the judges’ comfort zone.

Art enhances society by bringing us closer, by articulating our hopes and despairs, by making us see who we really are and who we could be. Awards have the power to publicize great artists, both popular and obscure, to expand the boundaries of what art is, how it is expressed, and who expresses it. Salvador Dalí said, “A true artist is not one who is inspired, but one who inspires others.” If the Golden Globes, Grammys and Oscars want to remain relevant, they need to recognize that those who inspire — and need inspiring — may not look, speak or create like them.”

This story first appeared in the June 2 issue of The Hollywood Reporter magazine.