Inside Clive Davis”Aretha!’ Screening With Joni Mitchell and Kareem Abdul-Jabbar 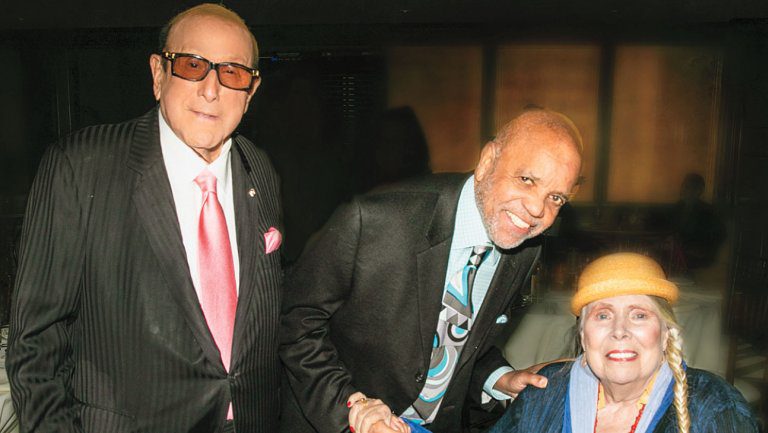 by Chris Gardner
The music mogul booked the Tower Bar for the event, which featured performances and stories of the late singer’s life.
Clive Davis invited 75 friends — including Berry Gordy, Diane Warren, NBA legend (and THR columnist) Kareem Abdul-Jabbar and Joni Mitchell (looking well after her 2015 brain aneurysm) — to a March 7 sneak peek of his new Aretha Franklin special, CBS’ Aretha! A Grammy Celebration For The Queen Of Soul (which aired March 10 and snagged 5.4 million viewers).
Davis, 86, booked the Tower Bar for the event and gave himself a front-row seat for the screening, which featured performances by Celine Dion, John Legend, Alicia Keys, Sza, Kelly Clarkson and Jennifer Hudson, who’s playing Franklin in a biopic. Davis mentioned that fact during remarks made prior to the showing as he detailed his relationship with the late singer and the success they shared over four decades.

Other impressive names in the room to hear Davis’ tales were Jimmy Jam, L.A. Reid, Clarence Avant, Metta World Peace, Rickey Minor and WME partner Richard Weitz. It was Mitchell, however, who generated the most adoration and attention from Davis and friends. She looked to be in good spirits, swaying along to the concert and having conversations with multiple guests.

“Aretha was approachable on a friendship level,” he told the crowd, recalling a trip to the White House with the singer to visit the Obamas. “But it was amazing to see the president and first lady because they knew, in effect, who was royalty … and who would be historic for generations to come.”

Davis treated her as such. He noted that he does not ever schedule breakfast or lunch meetings for work, preferring to end his day by 8:15 p.m. most nights with a non-business-related dinner. Unless Franklin was in town. “The only real exception was Aretha Franklin,” Davis said. Every time she was in New York, they would share a meal, and while she “loved soul food” she also favored top-tier eateries like Le Bernardin and La Grenouille.

On other outings, Davis said he was always surprised to see the response she would get from other legendary artists, politicians and fashion designers. While checking out a Valentino retrospective, Davis said he felt a tug on his elbow, the kind one would get “from a kid or a teenager. But it was a gentleman who said, ‘I have never done this but Clive, I have got to tell you, you’ve got to introduce me to Aretha. Her impact on me was profound.’ That gentleman was Ralph Lauren.”