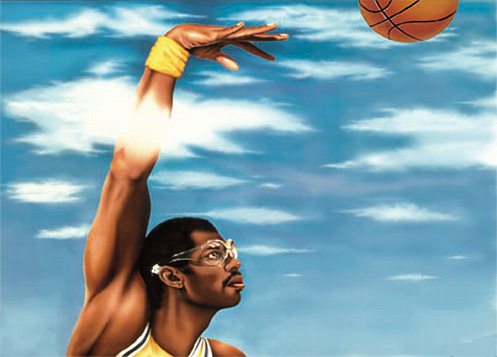 Shoot a skyhook after 50

The 50-plus player can still run with a younger crowd at the park or fitness club, but it’s best to avoid knocking around in the mosh pit under the basket. One trick the guys won’t see coming? The skyhook. You don’t have to be 7-foot-2: this is one of those rare times in life when someone says to you size doesn’t matter  — and means it.

Remember, the idea behind the skyhook is to always keep your body between the defensive player and the ball.

Step 1: Use both hands to tuck the ball under your chin.
Step 2: Step parallel to the basket with your left foot.
Step 3: Use your momentum from that step to launch yourself up into the air.
Step 4: As you rise into the air, turn to your left shoulder and extend the ball
over your head with your right hand.
Step 5: As you release the ball, aim for the center of the closest part of the rim, arching your shot so it will drop behind the rim.

Think of it as an athletic version of the Hokey Pokey: you put your left foot out, you bring your right arm up, you toss the ball in the hoop, then you shake it all about.

What makes this shot effective is that most young players have never had to guard against it, so you’ll catch your opponent flatfooted. As the ball drops through the net with a satisfying swish, you can then walk away singing: “That’s what it’s all about!”