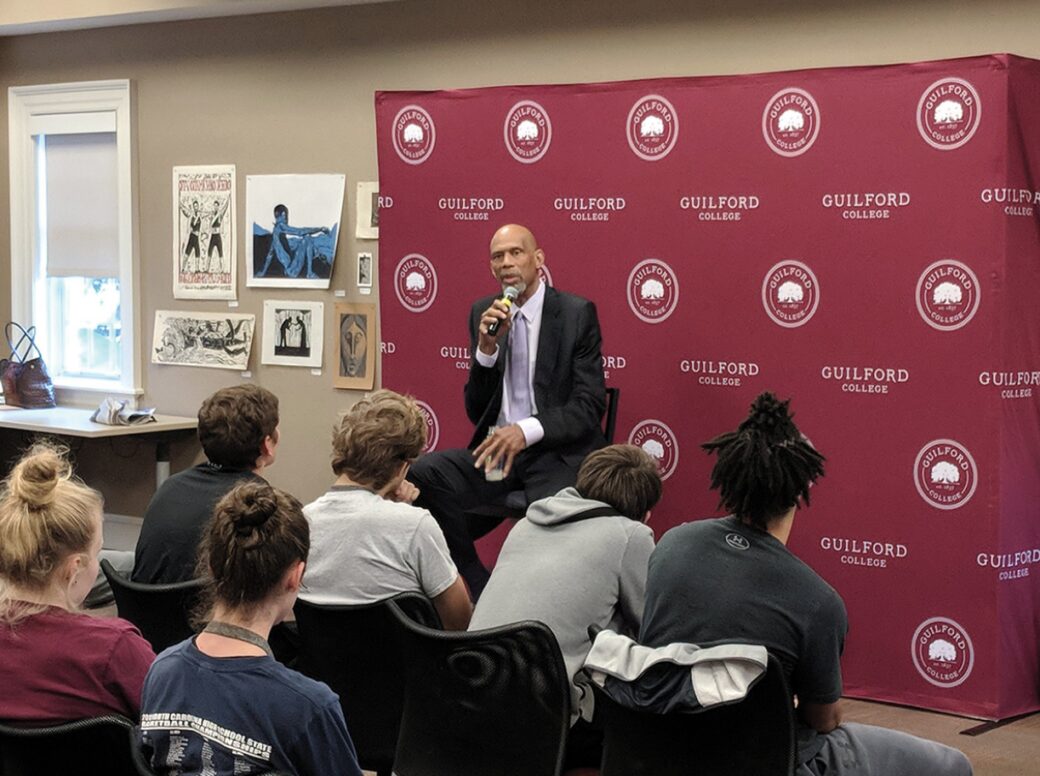 Speakers for the Bryan Series are chosen based off a multitude of factors. Subscriber and campus interest, benefactor suggestions and the qualities of speakers are highly considered. The Series looks into bringing a diverse set of perspectives to the stage.

“He is a prominent figure in athletics in the NBA as well as an activist,” said Bryan Series Director Suzanne Ingram. “He converted to Islam. He has a really compelling story about his life and he’s a NY Times bestselling author. He has many different facets, and our benefactors and subscribers are interested and, we have a lot of interest on campus as well.”

Abdul-Jabbar has a lot to offer the Guilford and Greensboro community.

“I think Guilford College can just look at what he has done for the culture of athletes, at his activism, at some of the issues he has taken on concerning race, religion and the impact he has had on raising awareness and learn from it to better Guilford College for the future,” said senior Mahmoud Henderson.

He touches many different communities at Guilford. The student-athlete community is thrilled to have a former professional athlete come speak at the series.

“Jabbar embodies what it means to be more than an athlete,” said junior Logan Shortt. “A best-selling author, outspoken activist and philanthropist, Jabbar practices excellence in every aspect of his life. I believe his story will inspire student-athletes at Guilford to pursue more avenues than just sports to utilize their gifts.”

Abdul-Jabbar converted to Islam more than 40 years ago, a decision he called, “a transformation of the heart, mind and soul.” Henderson is personally excited about Abdul-Jabbar coming to speak at the series.

“As a Muslim, I look up to him the same way many young Muslims have looked up to famous Muslim role models such as Malcolm X, Muhammad Ali, and the likes,” said Henderson. “They represent Islam with integrity and compassion and spread love while empowering others to treat people the right way, follow the religion and its Prophet. All and all, I think he is respected by the community for what he does and how he represents Islam.”

An advocate for education, Abdul-Jabbar serves as the chairman for his Skyhook Foundation, an organization that supplies STEM opportunities to underrepresented communities.

“I am really interested in his work mostly in advocating for education,” Ingram said. “He’s done a lot of work for impoverished areas and making sure they have good education. He has a great youth program.”

A recipient of the Presidential Medal of Freedom from President Barack Obama, Abdul-Jabbar is able to speak from a wide range of experiences. Guilford only sees it fitting that someone of his influence speaks for the Bryan Series.

“Kareem Abdul-Jabbar is a cultural icon,” said Shortt. “Having someone of his acclaim coming to speak in Greensboro is certainly a once in a lifetime chance. I am personally excited to learn and grow from his talk at the Bryan Series.”

Original article on opens in a new windowGuilfordian.com