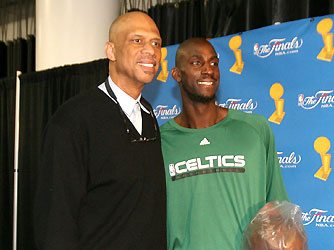 The Lakers’ Second Half
The Lakers played well in the third quarter and actually had a four-point lead going into the fourth quarter, but then Boston’s defense and the poor Laker shot selection really took them out of the game. The Lakers shot 5-for-20 in the fourth quarter. You’re not going to win shooting 25 percent. Kobe missed a lot of shots and at times seemed as if he was pressing in the fourth quarter when Boston really focused its defense on him. The team just did not do it correctly in terms of taking the best shots. The Lakers offense is based on constant ball movement and on Thursday night it seemed as if the ball was constantly stuck in one location too often. They needed to move the ball better and the guys who were open needed to take their shots. It might have been a case of guys deferring to Kobe when they should have thought about shooting their shots when they were wide open.

Game 1 Turning Point: Paul Pierce Returns
I think when Paul Pierce got injured, came back and made those two three pointers, that really turned the tides. At that point, when he was out of the game, the Lakers were trying to get the lead. They were only a point or two behind and they missed four or five shots in a row. So he comes back on the court and hits those two three pointers and we missed a couple of shots. It was essentially a 10-point turnaround.

Pierce’s return to the game after injuring himself was a great playoff moment. Paul has a lot to be proud of. His dedication to winning that game was quite evident. He comes back on the court and shoots the lights out and puts all the pressure on the Lakers to perform well and it didn’t happen for them. It was a very important moment in that game and it really swung the momentum to the Boston team. They continued to make their shots and play good defense, which is why they won.

Sunday: Keys for Game 2
If the Lakers want to win Game 2 they have to figure out a way to keep Kevin Garnett in particular off the offensive boards. They were badly outrebounded 46-33 in Game 1. They’re going to have to do a better job on their defensive boards and stick with their offense. Phil has run through this problem at other times when the Lakers decide that it’s OK to shoot a lot of three-point shots. That has always spelled disaster for them and it is still the case. If they can stick to their game plan and hopefully make their shots when they have them, they have a good chance of winning the game. The Celtics didn’t beat them as badly as they did during the regular season. It was a close game until late into the fourth quarter. That is a good indication.

The Mood of the Lakers
They’re disappointed that they weren’t able to make the best of this opportunity, because it certainly was a missed opportunity. But they also know that they have as many as six more games to change that. I’m looking forward to them coming out and playing better.