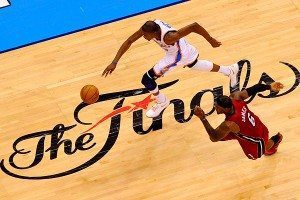 The NBA Finals are upon us, and I’m sure all of the true fans of the game are pleased with the matchup of the two best teams in the league: the Miami Heat and Oklahoma City Thunder.

Game 1 went to the home team, which should surprise no one after OKC’s easier trip through the playoffs. The Thunder blew through the Los Angeles Lakers and swept the defending champion Dallas Mavericks in short order. The San Antonio Spurs were more of a challenge, but the Thunder’s youth, intensity and versatility were finally too much for the Spurs.

OKC features a young team of emerging stars led by Kevin Durant, who has been the league’s scoring leader for three consecutive years. Russell Westbrook, James Harden and Serge Ibaka complete as focused and talented a young nucleus of players as you’ll find in the NBA. They will have the ability to learn and mature together since all of them are 22 or 23 years old. 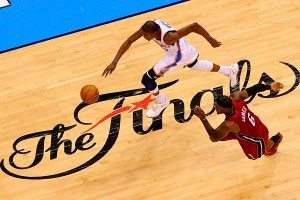 Kevin Durant and LeBron James are both chasing a first ring. Photo by Noah Graham/NBAE/Getty Images

The Miami Heat are led by LeBron James, and they have a lot to prove. Their failure to win a title after much hype hangs around their necks like a horse collar. Last year’s Finals loss to the Mavericks exposed the team as unable to present an inside game that balanced its perimeter firepower. Even though the franchise is in its second championship series in as many years with the Big Three, it endures the contempt of all the hoops fans who resent LeBron’s star power.

Nonetheless, don’t count the Heat out after their 105-94 Game 1 loss. Each time their missteps have been interpreted as fatal flaws, the Heat have refocused and played through the challenges. The series with the Boston Celtics was as serious a test as one could imagine. The veteran Celtics were on the verge of eliminating the Heat going into Game 6 of the Eastern Conference finals. In that game LeBron made a statement to the world. He showed all of his critics he could lead his team to victory. His 45 points, 15 boards and five assists smothered the Celtics. When the game ended, the Celtics were seen as old and tired, and Game 7 confirmed that assessment.

Because of that, I have a hard time understanding why LeBron is disliked so intensely. After all, he spent seven years in Cleveland trying to win a championship and he played his heart out. It’s true that The Decision was somewhat obnoxious and overdone, but he has paid his dues.

I guess my exit from Milwaukee was put together with more care in 1975. I told the Bucks that I would not be interested in playing for them anymore and my mind was made up. It soon became obvious that the best deal for the Bucks was to be made with the Lakers, even though I wanted to get back to New York. The negotiations were done away from media scrutiny, and I feel that common sense and good will prevailed. There’s something to be said for “old school,” I guess.

Back to the present. One important element in this series will be the play of Chris Bosh. His presence on the court — he played 34 minutes in Game 1 — makes it difficult for defenses to focus on James and Dwyane Wade. If he reinjures himself, it could leave the Heat shorthanded against the deeper Thunder squad.

The matchup at small forward, Durant versus James, was made in central casting. They are the leading scorers for their respective teams and their play sets the tone for their teams. That held true in the opener: Durant led all scorers with 36, and James led the Heat with 30. James was the runner-up in two of the years Durant won scoring titles. They will probably end up guarding each other much of the time, and that will have the fans licking their chops.

I think the Thunder have an edge with their depth, and they exhibited that in Game 1, even with Bosh coming off the bench for the Heat. Their up-tempo pace can be a problem for a Heat team faced with the prospect of stopping so many offensive threats. Will LeBron be forced to carry his team, a la Game 6 versus the Celtics? If that becomes the theme, the Heat may not prevail. One-man teams have a history of flaming out at the crucial moment.

In any event, I’m sure the fans will enjoy this one. There are so many talented players on the court, and they all have that fire to get it done motivating them. It took a while to get here in a lockout-shortened season, but this Finals matchup has definitely taken the edge off any preseason disappointment.