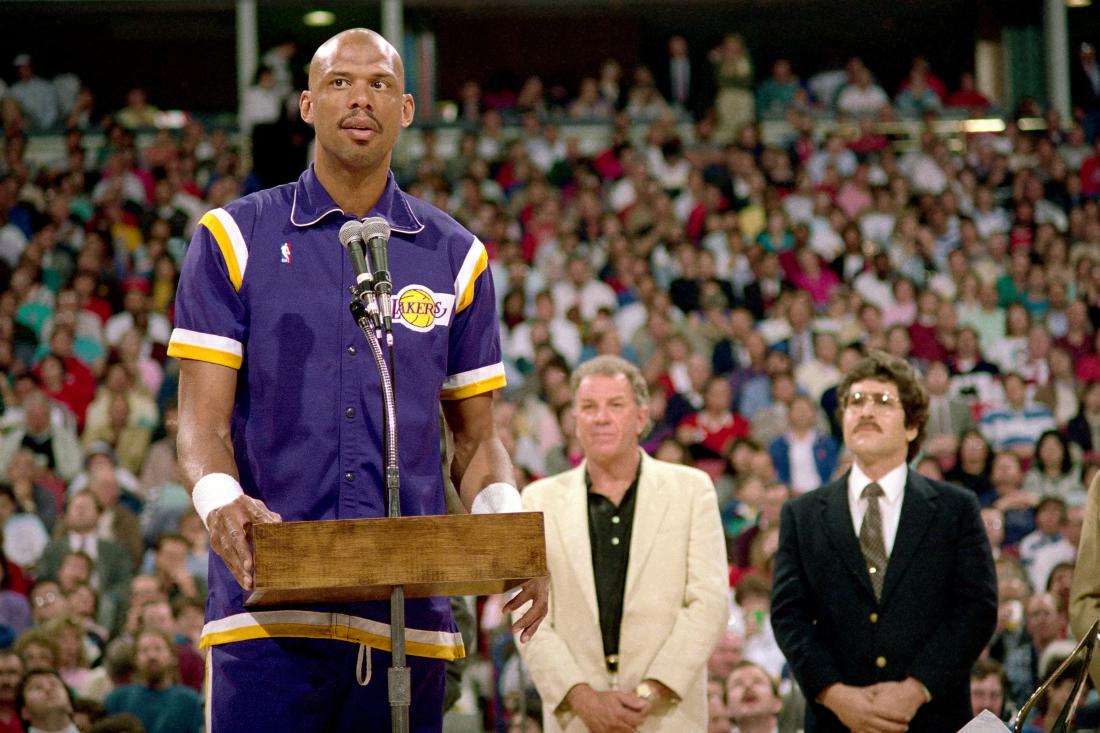 Kareem Abdul Jabbar of the Los Angeles Lakers addresses the crowd during a game played on March 23, 1989 at Arco Arena in Sacramento, California.

You don’t suck, retirement. I thought
You would. With no crowds to cheer.
No competitors to pump addicting adrenalin every day.
No satisfying sound of the ball swooshing through the net
Like a melon through silk.
No frown of frustration on your opponents’ faces.
No salty smell of victory as exhausted bodies
rush to the locker room.
No purpose.

You gave me other gifts I wasn’t expecting. That final year
when each city I visited showered me with glory and gifts
and pure love. The fans cheered, stomped feet, battered hands,
not because I was scoring points in one last game,
but because they wished me well on whatever I did next.

They wanted to say thanks for the memories:
the games where the father waved the foam finger with his giggling young son,
the games where the family talked about thrilling plays on the car ride home,
the games where kids saw players make moves that seemed physically impossible,
that they would try to duplicate the next day on the playground.
The humility I felt that year made me strive to be worthy of their appreciation.
If no longer as a player, then as a man.

You were generous, retirement. You let me discover who I was
without a ball in my hand and a number on my back.
I found a man with many other passions.
As a player, I had dabbled in writing like a would-be singer
who only sings in the shower. But you gave me
precious time to find my more mature voice,
and the courage to share my words with the world.
Even when they didn’t cheer.

Most important, you let me relearn
the glorious joys of basketball as a fan. In the stands
or on the couch, I am a cheering enthusiast,
rooting my team to victory.
You returned me to my childhood awe of just watching and loving the game.

You also let me appreciate the magnificent young athletes who replaced me.
Knowing I wouldn’t have to face them on the court,
I didn’t have to worry about strategies,
I could just marvel.

Like I marveled at Kobe Bryant.
Lord, that man could soar, could score, could leap from shore to shore.
He brought poetry back to the game
and to the hearts of the fans.
The poetry of form and function, motion and mindfulness.
He saw the court the way a sculptor looks at a block of marble
and imagines the great art waiting to be revealed.
And he revealed it game after game.

Retirement, embrace him like you did me. Teach him
all that you taught me about finding who I was off the court.
My place in the community.
My purpose.
Most of all, help him realize that there is no such thing as retirement,
merely passing from one room into another.
A bold adventure in self-discovery
where he may find a new Kobe
who may surprise and delight him all over again.

Highlights from 10 of the most exciting Laker Championships — a must-see for every Laker fan.

Here are some of the coolest moments from 10 Laker championships – a must see for every Laker fan.

opens in a new windowRead Full Article on TIME.com