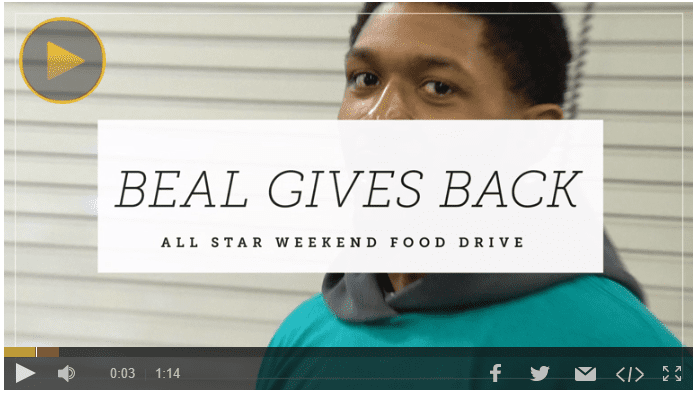 CHARLOTTE — Wizards guard Bradley Beal was packing boxes with canned goods on Friday at the Second Harvest Food Bank of Metrolina in Charlotte, North Carolina when one of the greatest players in basketball history ducked through the door and made his way down the warehouse aisles, shaking hands and taking pictures.

Beal is an NBA All-Star and was one of the headliners of an All-Star weekend charity event. And he had found himself in the presence of a legend, Kareem Abdul-Jabbar. As Abdul-Jabbar passed Beal’s table, the Wizards guard imitated his famous sky-hook with a big smile on his face.

Beal, 25, is carving out a standout career for the Washington Wizards. He is also continuing to grow off the court with various charitable efforts and an affinity for giving back.

Abdul-Jabbar has set the standard in both realms. He won six NBA championships, made 19 All-Star teams and is widely considered among the very best athletes of all-time. He is also a longtime philanthropist with an admirable history of using his platform to help others.

Abdul-Jabbar was there to greet citizens of Charlotte and also promote his Skyhook Foundation and its involvement with Goldin Auctions.  opens in a new windowHe is auctioning off many pieces of memorabilia from his playing career, including NBA championship rings and most valuable player award trophies.

Abdul-Jabbar is raising money to help elementary school kids in the Los Angeles area go to camps to learn about science, technology, engineering and mathematics (STEM).

“STEM is where all the good jobs are going to be in the 21st century,” Abdul-Jabbar said. “We want to get to them before peer pressure and popular culture get them to thinking that; so many think that they have to be Beyonce [Knowles] or Denzel [Washington] or LeBron [James] to be successful. We’re trying to show them that ‘hey, if you pay attention in math class or science class, you can be an engineer.'”

Abdul-Jabbar took notice of Beal and his efforts in Charlotte. He was proud to see a young NBA star giving back.

“I just had the opportunity to talk to him. He seems like a classy young man,” Abdul-Jabbar told NBC Sports Washington. “Certainly, you look at his stats, he’s taking care of business on the court.”

Abdul-Jabbar believes the NBA is in good hands with Beal’s generation. He cited James’ opening of a school in Akron, Ohio and how today’s stars use their large contracts and platforms to make a difference in their communities.

Beal had a few options for events to attend at All-Star weekend and chose the Second Harvest Food Bank. He spent hours putting together food packages for families in poverty and interacting with local volunteers.

Beal said he would have stayed longer if he had the choice.

“I don’t get tired of helping people. I could literally stand here all day,” he said. “If I didn’t have other events, I would be here all day, no matter how many boxes we have to stack up, until there is no more food left to put into the boxes.”

Beal was grateful to do his part in helping those who don’t have homes or food, especially during the cold winter. And he was proud to help out alongside Abdul-Jabbar, who has set a high bar for he and other NBA players off the court.

“It’s humbling, man,” Beal said. “That’s just motivation for me and a lot of people to just constantly do what is right and do what it takes to help other people.”