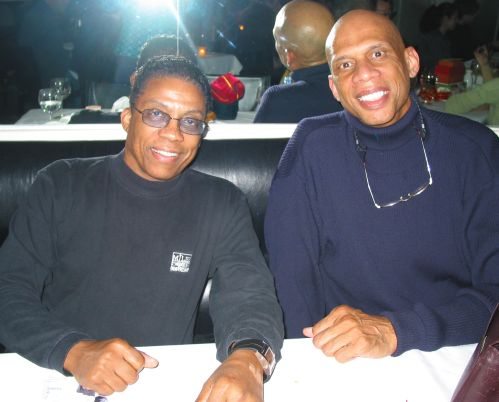 Herbie Hancock has just been awarded the 2008 Grammy award for Album of the Year — a collaborative effort with Joni Mitchell. I’ve known Herbie since I was in high school. The night of my high school graduation, I went to the Village Vanguard and had the pleasure of seeing him perform with Miles Davis’ band, without Miles. I got to know the whole band because of my friendship with bassist Ron Carter. We have maintained our friendship since this time. It has been a real treat to see Herbie’s reach expand constantly.  He has never forgotten Duke Ellington’s edict to swing.

“River: The Joni Letters” represents Herbie’s expansion beyond the race- based straitjackets of nomenclature imposed on American musicians.  American music has such a rich and varied foundation it is really grotesque to try to define it as R & B or rock or pop or metal or Latin or Reggae or country or blues. For example, the blues and country evolved in exactly the same environment–  i.e. the Mississippi Delta, West Texas, Nashville, Tenn., and New Orleans, to name a few.  But for some reason, the music of Elvis must be regarded as different from Chuck Berry even when both artists embrace the same regional and artistic roots.

Maybe Herbie’s success will make a few a more people think about the absurdity of these genre designations. After all, it is the clash of America’s various cultural heritage that give us such a rich and varied musical landscape.

Herbie certainly inherited the mantle of Art Tatum and Bud Powell, but his world is so much bigger than that. My hope is that as Americans our ability to appreciate our enormous musical choices will continue to expand. Don’t forget, Satchmo, Johnny Cash, the Duke and Frank Sinatra are watching … and listening!

p.s.: Herbie collaborated with me on a song for my audio book “On the Shoulders of Giants.” We took an old song from the 1930s, entitled “Stompin’ at the Savoy,” and Herbie remade it into a modern jazz song. will.i.am from the blackeyed peas sang vocals with Nikki Yanofksy.

Click here to listen to the song: “Stompin’ at the Savoy”