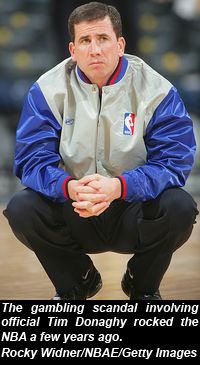 Just before this year’s NCAA tournament began, the news broke that the FBI is investigating allegations that gambling influences might have affected the scores of a couple of Auburn’s regular-season games. Unfortunately, it’s an old, familiar story in basketball. 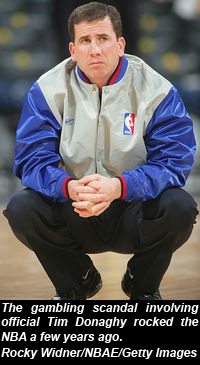 Point-shaving suspicions are probably never going to be completely removed from basketball’s little circle. The temptations that affect gamblers who know how to approach young, financially disadvantaged players with some “sweet green” are always in play. It’s so easy. Befriend a crucial player on a team that gets the attention of the “pickers” (the people who lay odds on college games) and you might be able to make a quick killing on a bet. Gambling on sports outcomes is such an everyday part of American life that is hard to eliminate the potential for this type of dishonesty in college sports.

Even in the professional ranks, there has been a recent example of someone who tried to get rich by dishonest means. A couple of years ago, Tim Donaghy, an NBA referee, was prosecuted for his flirt with gamblers. But vigilance at the professional level has kept the games relatively clean in all of our popular pro sports over the years.

However, college sports are another situation altogether. There are hundreds of schools that have major athletic programs, and it is impossible for the NCAA to watch who among its players is talking to whom.

The worst time for gambling scandals in college basketball was during the late 1940s and early ’50s. Several players in the New York metropolitan area were approached by gamblers and told that they could make easy money by shaving just a few points in certain games. The lure of easy money that would be difficult to trace was too much, and players and some student managers became involved in fixing games. The basketball program at CCNY never recovered; it was scrapped in the years just after its team won both the NIT and NCAA tournaments in 1950.

My high school coach at Power Memorial in New York City in the early 1960s, Jack Donahue, was himself a student in high school at that time, and was very much troubled by what he saw evolving. Basketball was a very important part of his life and he wanted it to be free of any corrupt influences. When he returned home after a stint as a rifle instructor in Korea, he began his exceptional career as a coach. 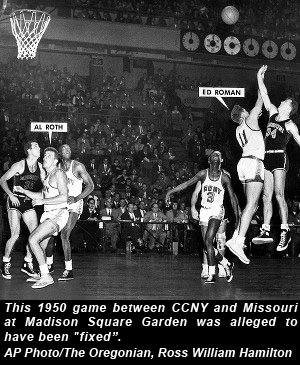 Just prior to my entry into high school, there was a scandal involving high school players Connie Hawkins and Roger Brown. They became friendly with an older player named Jack Molinas who had gambling connections, and made introductions for him with some of their friends who were also prominent players. Although neither Hawkins nor Brown were ever charged or accused of fixing games or shaving points, the resulting scandal was devastating for their career paths. They were not allowed to play college ball, and the NBA was also closed to them. The emergence of the ABA was the only outlet that gave them the opportunity to play hoops for a living.

Hawkins eventually sued successfully to get his status changed to allow him to enter the NBA ranks. Coincidentally, he and I were both NBA rookies in 1969-70, although he was some five years older than I was. Brown was never able to get into the NBA but had an exceptional career in the ABA and was seen as one of its best players. He would have been a star in the NBA because his talents were truly exceptional, but the stigma of his gambling scandal associations was never put to rest.

Coach Donahue referred to these two players anytime he talked to the team or me personally about the dangers of making questionable friends. He called the gamblers and their go-fers “spooks.” He told me not to play in any unsanctioned games or accept any kind of gift — especially money — from anyone. In those days, there were “benefit” games held in many places around the country. Prominent players like myself would be invited to participate and could be expected to be given money “under the table.”

If any knowledge of this type of transaction ever came to the attention of the people who policed amateur sports, it would mean the end of a player’s college eligibility. College ball, in those days, was the most certain path to the NBA, so I was keenly aware of how easy it was to lose such a special opportunity. 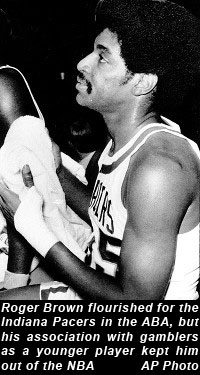 Journalists were also on Coach Donohue’s “no talk” list because they, too, could be fronting for a clever gambler. But as we won more and more games, this shielding of our team became more and more difficult. We eventually had a 76-game winning streak that was broken by DeMatha High School of Hyattsville, Md., in 1965 in my senior year. Personally, I was never approached by anyone who was trying to get me to do something stupid; and by then, I was able to understand how to avoid the wrong types of people. I had my heart set on going to college and graduating, and I’m proud to say that I am the first person in my family to obtain a bachelors degree.

Nowadays, even though we’re still having problems with point-shaving, young players at the high school level seem more aware of the possibility of being exploited by anyone, including gamblers and unscrupulous representatives of college sports programs. Being able to go into the professional ranks at a younger age has had a major effect on the game of basketball. The college game can no longer keep its best players, who now leave for the big paydays offered by the NBA at their earliest opportunity.

This has really hurt the college game. Personally, I do not think it’s a good idea to allow players into the NBA before they are 21 years old and have had the chance to mature and learn the game. But because the current rule allows 19-year-old players into the NBA after they’ve been out of high school for just one year, the league is sprinkled with players who have the physical ability but lack the basketball IQ and maturity necessary to make it in the pro ranks.

I believe many fans are nostalgic for those days when there was more order throughout the game. Of course, we can’t return to the way it was, but I think the old-school type of team is still the best template for the modern game. I know some people think Coach Wooden’s style would be tough to accept by today’s players, but the values he tried to instill are still the values every parent wants their child to learn one way or another. Also, the acquisition of a college degree is still an important part of anyone’s personal development and should be valued over a short-lived athletic career.

It’s up to the individual athletes to choose the people they associate with wisely. Perhaps the lure of the “real” money involved in an NBA contract is a factor in keeping most of them cautiously avoiding scandalous situations. It’s a brand world in the field of hoops.