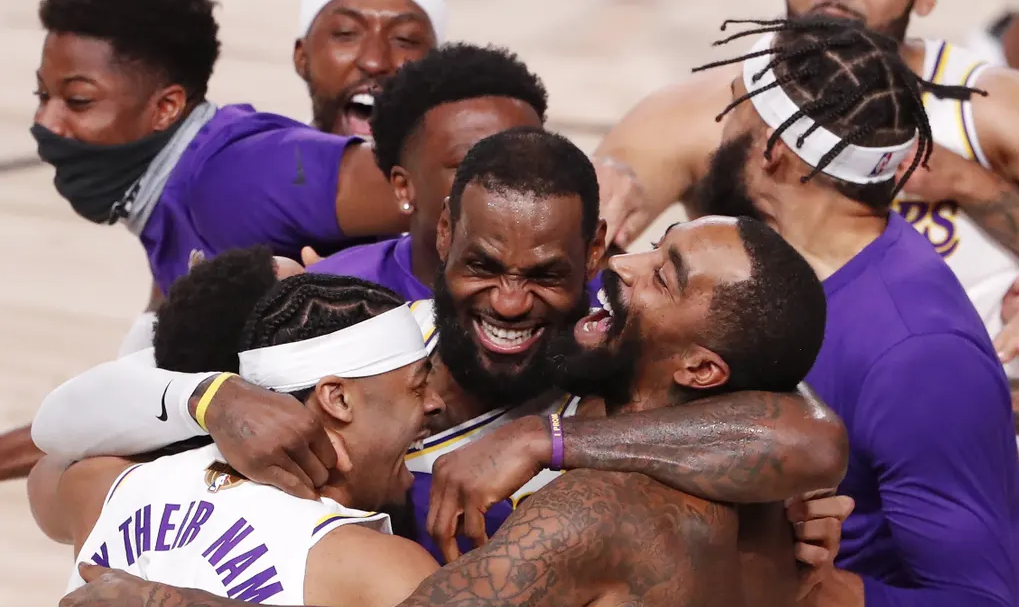 Watching LeBron motivate his teammates beyond their limits makes him the best on the court, but it’s his commitment to the disillusioned and disenfranchised that truly sets him apart

Winning an NBA championship is nothing new for the Los Angeles Lakers. They have been in the finals a record 31 times since winning the title on their first trip in 1950, and they tied the Boston Celtics with 17 championships after opens in a new windowseeing off the Miami Heat on Sunday night. But those are just statistics for superfans to rattle off over steaming pizza or a trivia question on a soggy napkin in a sports bar. Championship playoffs are much more than naked numbers – each has its own unique personality, its own significance to the players and fans, and its own impact on American culture. The game is never “just a game”. For those who think sports are merely mindless entertainment somehow separate from the Sturm und Drang of the world around, you haven’t been paying attention lately. Sports have always been a mirror of national values reflecting all the same struggles and turmoil. This year’s championship series is especially meaningful because, although it took place during one of the most politically and socially chaotic and world-bending times in recent history, in many ways, it was an expression of the finest qualities of America – both on and off the court.

On the court, the Lakers came out of the gate like a thundering juggernaut, relentlessly pummeling the Heat for two games into what many people thought was a defeated heap of expensive athletic shoes. But many people were wrong, and the series went to six games. The NBA finals were much more dramatic than we expected, which is due to the gutsy determination and professionalism of the dedicated players who gave it their all, despite playing opens in a new windowunder the most restrictive and challenging circumstances in the history of the sport.

That the finals took place at all is a complex blending of capitalism and ingenuity – two things America excels at. The NBA, like all professional sports leagues, needed to make money. But unlike the other leagues, they MacGyvered a safe and responsible way that protected their players, the staff and fans: they housed everyone involved with the teams and the games in a virtual bubble at Walt Disney World in Orlando, Florida, for the several months it would take to complete the season, the playoffs and the finals. On 19 August, the opens in a new windowNBA revealed that after testing all 341 basketball players, none were positive for the Covid-19 virus. Yet ,during the first week of the Major League Baseball season, a total of 29 players tested positive. By 21 August, one-third of the teams in baseball had postponed games, likely because of players who didn’t follow safety protocols. The NFL suffered setbacks as well when 23 players and personnel from the Titans and several players from other teams tested positive, causing games to be postponed.

What’s especially impressive about the NBA is that the bubble proved to be more socially responsible than the US president, who in his maskless wonderland opens in a new windowfacilitated the infections of many who attended a White House ceremony. They also proved to be more patriotic in that they followed government/CDC guidelines, unlike the president. Finally, they proved that residing in a bubble doesn’t mean you live in isolation from your duty to your country or community. They displayed ‘Black Lives Matter’ on the floor of the court and they postponed several games, not because of infections, but opens in a new windowbecause the police shot Jacob Blake, an unarmed black man, in the back seven times.

Though many NBA players throughout the season were vocal about their support for equality, the finals brought the focus on one man as the symbol of the merging of athletics and ethics: LeBron James. To be a symbol, one must excel at their sport. Watching LeBron’s chiseled Mount Rushmore face of determination as he displayed a dazzling blend of agility, grace, power and surgical skill that clearly amped up his teammates to push themselves harder and higher showed he deserves every accolade he gets. But his unwavering willingness to continue to opens in a new windowconvince the disillusioned and disenfranchised why they need to vote, makes him the embodiment of this NBA championship triumph.

Naturally, the NBA’s expression of social responsibility made it a target for conservatives who wanted it to fail. On 1 September, Trump tweeted: “People are tired of watching the highly political @NBA. … opens in a new windowBasketball ratings are WAY down, and they won’t be coming back. I hope football and baseball are watching and learning because the same thing will be happening to them. Stand tall for our Country and our Flag!!!”

Ted Cruz, the Republican senator from Texas, echoed the sentiment by tweeting that the NBA ratings are low because of the politicizing of the league and that he hadn’t watched a single game of the finals for the first time in years. He ended with the hashtag “GoWokeGoBroke”. That really says everything you need to know about the character – or lack thereof – of both men: Never speak out against injustice if it costs you money. These are the sentiments of people born to collaborate with the enemy. To his credit, Mavericks owner Mark Cuban called Cruz out in his own tweet: “A US Senator with 3 @NBA teams in his state, employing thousands of people and he is rooting for their businesses to do poorly.”

It’s bad enough that Trump and Cruz show such a lack of moral leadership that equates ethics with popularity (think which side they’d have been on when slavery, women not voting and killing witches were all popular), but they also are just wrong about weak ratings being a result of rejecting the message. Because of the pandemic, many sports are competing against each other on TV for the first time ever, and it’s opens in a new windowaffecting all their ratings. The Stanley Cup final, Kentucky Derby, Preakness Stakes, Indy 500 and golf’s US Open have all had ratings declines in the double digits. They also seem totally unaware that as many as 26 million Americans – about one in every 15 – protested against the police killing of George Floyd over the summer. How’s that for popularity, Mr President?

The NBA finals are always about the two best teams battling it out in astounding feats of athleticism and grit. But this year that has called on all of us to endure so much, the finals were also about two teams that want to stand for something more than being the best team, they want to be the best examples. This year opens in a new windowLeBron James exemplified what a modern athlete should be, the Lakers exemplified what a team should be, and the NBA exemplified what a professional sports league should be: fiercely dedicated to their sport and passionately committed to their community.

The game is never “just a game”.

This story first appeared on The Hollywood Reporter. opens in a new windowClick here to view.