Abdul-Jabbar: More Opportunities toTurn Pro in Science Than in the NBA 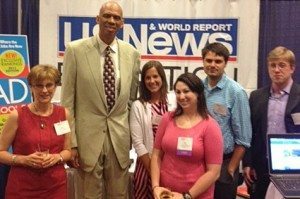 American students lack the skills needed to compete globally in science, technology, engineering, and math. But the cause of that skills gap isn’t our education system; it’s our culture, inventor and entrepreneur Dean Kamen said Tuesday at the U.S. News 2012 STEM Summit.

“To think that it’s a supply problem or that it’s an education problem is ridiculous,” Kamen said.

Undermining efforts to promote interest in STEM education is a culture that places sports stars and celebrities on pedestals, but makes scientists and engineers the butt of jokes, he added.

This is especially true in underserved minority communities, said basketball superstar Kareem Abdul-Jabbar, a sports legend in his own right.

“They see themselves only being able to be successful in the area of sports or entertainment,” Abdul-Jabbar said during a panel discussion at the summit. “If they can’t be Jay-Z or LeBron James, they don’t think they can be successful.”

Changing that perception requires parents, educators, media, and the business community holding up scientists and engineers as role models, instead of celebrities and professional athletes.

After all, there’s a much higher chance their students will go pro in tech than in basketball.

“There’s only 450 NBA jobs available at anytime,” Abdul-Jabbar said. “There are thousands upon thousands of engineering jobs. They can walk right off the stage when they get their diploma and be employed. That means a lot.”

While strides are being made in STEM education, the interest level needs to increase rapidly in order to fill projected holes in the U.S. labor force, said Kamen, inventor of the Segway.

“Every four years we wait, we’re losing an incredible number of opportunities,” he added.

Capitalizing on those opportunities, specifically with minority students, is a critical piece of the STEM workforce puzzle, said Glenn Miller, vice president of technical operations at Lockheed Martin.