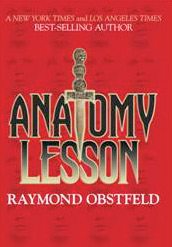 opens IMAGE file I love mysteries.  I’m a huge fan of the Sherlock Holmes stories, as well as hard-boiled writers like Chester Himes, Raymond Chandler, and Dashiell Hammett.  Desperate criminals chased down mean streets by world-weary detectives, now that’s entertainment.  That’s why I’m especially excited that Raymond Obstfeld, my friend and co-writer of “On the Shoulders of Giants,” has just published a suspense thriller that’s set in Southern California.  This book is the first in a series about Stevie Croft, an assistant district attorney with a remarkable ability: she possesses hyper-memory, the uncanny ability to remember everything she’s ever seen or heard or read.  As she discovers, the ability is more of a burden than a blessing.  She’s kept this ability a secret, until a clever and demented serial killer threatens to reveal it. Unless she uses her power to catch him.  The problem is, Stevie’s hyper-memory is starting to fail, and in her pursuit of the killer, other dark family secrets are exposed.  Great concept for a movie or television series!

Because Raymond and I are friends, I don’t think it’s appropriate that I review the book, but I will quote Shirley Johnson, the reviewer from MidWest Book Review:

“I have to tell you I absolutely loved this book.  The characters were so well developed that I thought of them as people I had known all my life. The story took me down alleys, into close spaces, and had me racing for my life just like the characters in the book. Talk about drawing a person into the action, this book certainly does that. I was caught up in their traumas, their emotions, and every aspect of their lives.  Good job! The kicker here, however, is the conclusion.  I was shocked, beyond shock.  I would have never guessed what was coming in a million years, and I’m pretty good at figuring mysteries out.  What a twist!”

All I can say is hold onto your hat when you’re reading this book.  It’s going to have you speeding down the road at a one fast clip.  You will not be bored, that much I guarantee, as your mind  is racing trying to figure out the next move of the killer, what is going on in Stevie’s personal life, and how all the other characters are involved. I don’t know when I have enjoyed reading a book as much as I have this one.