A Fight for Justice: The Death of Osama Bin Laden 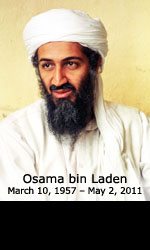 President Obama got it right in the way he handled the elimination of Osama Bin Ladin. We have achieved a goal but this conflict won’t necessarily be ending at this point. For the thousands of Americans who lost a loved one on 9-11 there is some sense that justice has been served but as a nation we must press on. As a Muslim American I am relieved that President Obama has not made this into a crusade against Islam but rather as a righteous fight for justice. Bringing justice to a mass murderer is something that people of all faiths can understand and support.  Hopefully this will shorten the length of time that we have to be involved in this struggle.