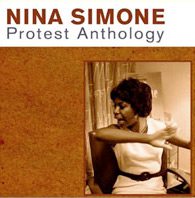 Jazz singer and civil rights activist Nina Simone once said, “An artist’s duty is to reflect the times.” Nothing reflects the turmoil of Nina’s times or her commitment to improving those times than her newly released album, Protest Anthology. This collection of eleven previously unreleased live recordings and interviews offers fervent fans and newcomers alike a glimpse behind the polished stage singer and into her raw heart of darkness regarding her hatred of racial and gender inequality. Yet, it also displays her versatility as a singer who could cross-pollinate genres creating hybrids of unequaled grace and power. Jazz, blues, soul, folk, gospel—Nina wore all those labels with pride and disdain. Pride in her success in such a variety and disdain for being labeled at all.

Protest Anthology features some potent songs that reflect her days performing and speaking at civil rights marches throughout the 1960s. In fact, it’s practically a chronology of many of the major civil rights milestones of that time. Despite it’s sprightly tempo, “Mississippi Goddamn” (1964) addresses her horror at the 1963 murder of activist Medgar Evers and the bombing of the Birmingham church that killed four black girls. (The record was boycotted in several Southern states.) “Old Jim Crow,” released that same year attacks the Jim Crow laws that perpetuated segregation and hostility. Her cover of Billie Holiday’s “Strange Fruit,” about lynching, is angrier and grittier than Billie’s eerie, more languid version. “Four Women,” written by Simone, laments the stereotypes of women of color. The simple melody played by the accompanying piano accents her increasing outrage as the song progresses. Her performance of “Why? (The King of Love Is Dead),” about the impact of Martin Luther King, Jr., is as heartfelt and touching as any song you will ever hear.

Several of her standards are featured, including “Backlash Blues” (1967) by her friend Langston Hughes, and her adaptation (with Weldon Irvine) of her friend, Lorraine Hansberry’s play, “To Be Young, Gifted and Black.” This 1970 song had such an emotional impact that it became a civil rights anthem later covered by Aretha Franklin, Donny Hathaway, and even Elton John. Although her performance doesn’t have the polish of her earlier recording, it does convey her inner passion and frustration.

It’s a shame that this magnificent album appears five years after Nina’s death. On the other hand, as she herself says in one of the interviews in this collection,

“When I go, I’m going to know that I left something for [my people] to build on. That is my reward.”

Fortunately, this is a reward we can all share.