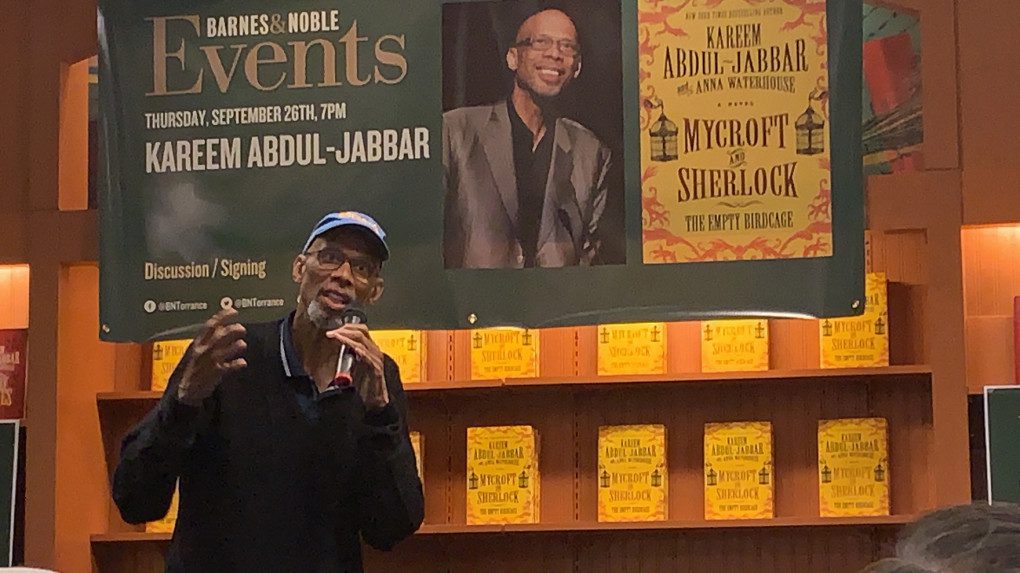 Kareem Abdul-Jabbar’s record of 38,387 career NBA points has stood for 20 years. According to his manager, Deborah Morales, Abdul-Jabbar — author of 16 books, only six about basketball — has written more words than he scored points during his 21-year Hall of Fame career.

Abdul-Jabbar’s latest, “Mycroft and Sherlock: The Empty Birdcage,” was released last week, his third about mystery icon Sherlock Holmes’ older, smarter brother. In response, more than 500 people crowded into the Barnes and Noble Bookstore in Torrance’s Del Amo Fashion Center for a chance to meet Abdul-Jabbar and snag a signed copy.

“I always enjoyed Sherlock Holmes from the time I was a kid,” said the former UCLA Bruin and L.A. Laker. “I used to always watch the Sherlock Holmes Theater on television on Saturdays. When I was in the 10th grade we read the “Red-Headed League” and was shocked to find out that he was not a real person.”

Like many fans of the legendary and, yes, fictional detective, Abdul-Jabbar found himself fascinated with Mycroft, a minor character in Arthur Conan-Doyle’s books who intermittently had a major impact on the crime-solver’s life.

“I was surprised that there were that many people like I was that were curious as I was to who Mycroft was,” Abdul-Jabbar said.

Abdul-Jabbar’s first book in the Mycroft Holmes series was published in 2015; a second followed in 2016. Both made the New York Times best-seller list.

“The fact that people wanted to know about about the third installment is wonderful,” he said. “I didn’t expect this. It’s pretty neat.”

After a short talk about the book in Torrance, Abdul-Jabbar signed more than 500 copies of his books, posed for photos and chatted with fans for about two hours. Some quizzed the author about Sherlock, the art of writing and the joy of mysteries — and, not surprisingly, some came to talk basketball.

“It was kind of neat to meet Kareem and to be able to hear what he had to say,” said Robert Young of Westchester. “It is unique because it is an unexplored niche in the Sherlock Holmes series. I look forward to reading it.”

“I think it is pretty awesome that Kareem is writing these type of books and he also writes many children’s books,” said reader Valerie Cooper. “I think is so important for kids to see a star-athlete who is also an accomplished writer.”

“I love reading and I love the Lakers and basketball. Kareem is one of my idols,” said Aidan Toscano, a 16-year old Redondo High student-athlete. “I thought it was a great opportunity to meet him and get his book.”