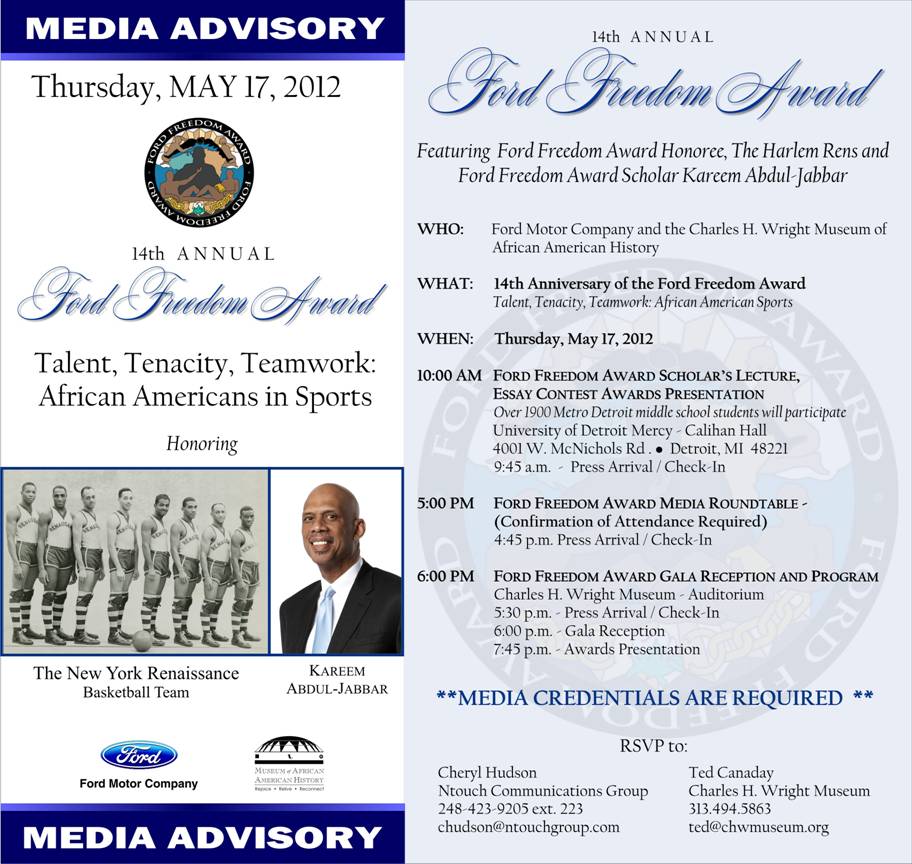 The New York Renaissance “Harlem Rens” basketball team and all-time NBA leading scorer Kareem Abdul-Jabbar will be honored for their talent, tenacity and teamwork in sports at the 14th Annual Ford Freedom Award on May 17.

The Ford Freedom Award program includes a scholar’s lecture by Abdul-Jabbar to nearly 2,000 elementary and middle-school students from around the state, presentation of the 2012 Ford Freedom Award Scholarships and a black-tie gala at the Charles H. Wright Museum of African American History. “The Ford Freedom Award has a legacy of honoring trailblazers who have changed the world through their actions,” said Ziad Ojakli, group vice president, Government and Community Relations, Ford Motor Company. “Ford is proud to recognize one of the greatest teams of all time that paved the way for many of today’s athletes, and a sports legend who demonstrated excellence not only through his play on the court but through his dedication to the education of youth.”

NBA hall-of-famer and newly selected U.S. Global Cultural Ambassador Abdul-Jabbar is this year’s Ford Freedom Awards Scholar. His career spanned six championships and a record six regular-season MVP awards. As an actor, coach and promoter of social justice and African American history, Abdul-Jabbar has authored a book and produced a documentary highlighting the career of the Harlem Rens, “On Shoulders of Giants.”

“The history of African Americans in sports is a storied one,” says Juanita Moore, president and CEO, Charles H. Wright Museum of African American History. “But it’s easy to forget the talent, tenacity and teamwork it took for those early pioneers to demonstrate not only physical prowess, but also the courage and fortitude necessary to overcome prejudice and roadblocks to their ability to even compete. In the modern era, Kareem Abdul-Jabbar has earned his place as a basketball legend, but continues to build on that legacy with his achievements as a writer, filmmaker and Global Cultural Ambassador.”

The Charles H. Wright Museum of African American History, in partnership with Ford Motor Company, launched the Ford Freedom Award program in 1999 to create a forum for celebrating and recognizing individuals whose achievements brought forth lasting and positive change for African Americans and the world. In addition to the evening gala, the Ford Freedom Award program includes a statewide essay contest for grades four through eight, which this year drew more than 1,900 submissions.

The Ford Freedom Award program is made possible by a grant from Ford Motor Company, and is an annual fundraiser for the Charles H. Wright Museum of African American History.